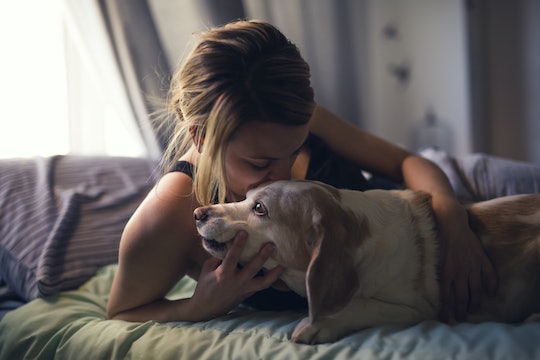 They’re not called man’s (or, ahem, woman’s) best friend for nothing — dogs and their owners have had a notoriously close relationship for generations. These days our furry friends are more likely to be emotional companions than hunting partners, but the fact of the unique bond remains. If you’re a dog owner, odds are you’ve been amused or mystified by the near human behavior of your canine more than once. Some dogs, for example, always seem to know when you’re feeling blue. Could this sixth sense be the reason why your dog is always trying to cuddle with you? Some experts say it’s likely.

Holistic physical therapist Sally Morgan, who works with both humans and animals, tells Romper that several studies indicate that areas of the dog’s brain involved with bonding and love are activated when the dog hears his person’s voice or smells their scent.

"We also have evidence that gazing softly at your dog encourages her to do the same, which spikes feel-good hormones like oxytocin and serotonin in both you and your dog," Morgan says.

Unsurprisingly, this evidence was not shown in wolves, which Morgan says supports the theory that dogs are evolving to learn to engage with us in ways that we understand as love. “Dogs want to be with us and will choose to sleep near us or follow us throughout the day, no matter what their breed’s intended original purpose was,” says the best-selling author of Dances of the Heart: Connecting with Animals.

But Morgan clarifies that even the sweetest dogs have their limits. “Tight hugs can feel threatening to dogs and most will find this unpleasant. But hugging is not cuddling. Cuddling includes sitting close and enjoying bodily contact, which can create a state of heart coherence in which your body rhythms actually synchronize.”

So how do you know if your level of physical affection is welcome — or one step too far? Morgan says to look for the following signs of elevated stress in your dog: Increased body tension, hard stare, flattened ears, breath holding, and obviously, struggling to get away. If your pup is particularly subtle these signals may be easy to miss, so its important to pay attention to his physical response and honor his need for space or less threatening interaction when you observe these signs.

Licensed marriage and family therapist Katie Ziskind incorporates animal therapy into her Connecticut-based practice. Ziskind tells Romper that dogs cuddle because, as mammals just like us, they share emotional centers in the brain: “Dogs, like humans, need touch and affection to feel loved and wanted. Cuddling makes them feel sage and protected.”

So if it’s true that dogs are such emotional creatures, why do some act so aloof, or even aggressive? Ziskind says that just like with humans, dogs are formed by their relationships and surroundings. “Dogs that don’t get love, affection, and touch, just like humans, tend to be aggressive because they have never learned how to attach emotionally.” Some dogs can learn emotional attachment later in life, while others realistically never will.

But we can’t look back over the history of human-canine relationships and forget the truth of our ancestral roots: Both species likely relied on the body heat of the tribe or pack to stay alive during the cold nights. So as much affection as you and your pup have for one another, the simple biological instinct to seek warmth is also a factor at play.

This doesn’t diminish your bond, but actually affirms it. After all, I know I’m not the only dog lover in the world who believes my pet has saved my life. And whether literally or figuratively, that’s worth celebrating with a nice, long cuddle.