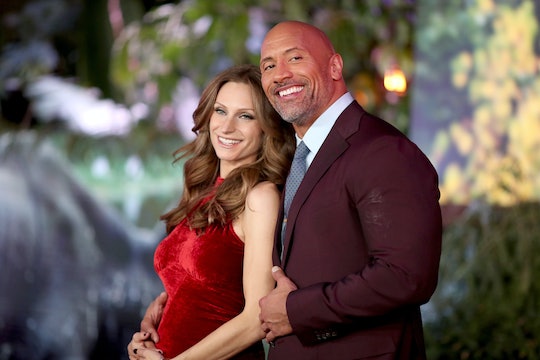 The Rock Is Expecting Baby No. 3 With Lauren Hashian, & His Announcement Is The Sweetest

Get ready for the sweetest announcement of the season, folks, because on Monday evening, Dwayne "The Rock" Johnson shared some pretty big news. As he announced in an adorable Instagram post featuring their 1-year-old daughter, the Rock and his girlfriend are expecting baby No. 2 sometime next spring.

The Rock's Instagram post showed little Jasmine Lia, his first child with girlfriend Lauren Hashian, sitting beneath a handwritten pregnancy announcement by a Christmas tree, smiling and looking way too cute. The sign above her read, "It's a girl! Can't wait to be a big sister!!! And finally be the boss!"

The picture, of course, also came with a caption from the Rock that read:

Our Jasmine Lia would like to make a big announcement - IT’S A GIRL! [Hashian] and I are boundlessly grateful for this blessing as this spring we’ll welcome our second baby. Plus, Jazzy is excited to boss around and protect her lil’ sis. And once again, big daddy is completely surrounded by beautiful estrogen and loving, powerful female mana. All girls. One dude. And a boy dog. I wouldn’t have it any other way.

In typical Rock style, he even threw a "#TequilaTime" hashtag into the mix, so you better believe that he and his family are celebrating the happy news.

This will be the Rock's third daughter, and his second with Hashian, who he's been dating since 2007, according to Us Weekly. The Rock is also a dad to 16-year-old Simone Alexandra — who just got named this year's Golden Globe Ambassador — from a previous marriage. (The Rock's ex-wife from that marriage, by the way, has been his manager since the two split ways over a decade ago. That's a fun fact that I kind of love, and the friendly family dynamics I'd love to have in the event of a split.)

As you could probably gather from his Instagram post, the Rock is pretty stoked to add yet another girl to the family. And for those who have been keeping up with the Rock, that should come as no surprise: he's been an outspoken feminist for a while now. In the past, he's shared his feminist parenting goals for his 1-year-old on social media and endorsed the The Rock test for sexual harassment (men, if you wouldn't say or do something to the Rock, then don't do it to the women you work with). He also regularly celebrates the women in his life, from his mom to his daughters to his girlfriend.

Over the years, the Rock has spoken openly about his approach to parenting, as well. "I realized being a father is the greatest job I have ever had and the greatest job I will ever have," he said during an episode of Oprah's Master Class in 2015, according to People. "Throughout the years, throughout the ups and downs, I’ve realized that the most important thing that I could do with my daughter is lead our life with love."

(You guys, there's a reason everyone loves the Rock.)

It sounds like the Rock is equally as excited to launch into raising daughter number three. Soon after announcing Hashian's second pregnancy on Instagram, the Rock addressed the baby news while on The Ellen Degeneres Show.

"Lauren and I are so happy," he said, according to People:

The crazy thing is, I was raised by women, and still to this day, I’m totally and completely, 100 percent surrounded by only women! And I love it. It's a wonderful thing.

It looks like Hashian and the Rock have a busy season ahead of them, with little Jasmine's second birthday on Dec. 16; a schedule full of events for the Rock's upcoming new film, Jumanji: Welcome to the Jungle; holiday festivities; and a new baby due by spring 2018. Congratulations to the happy couple!