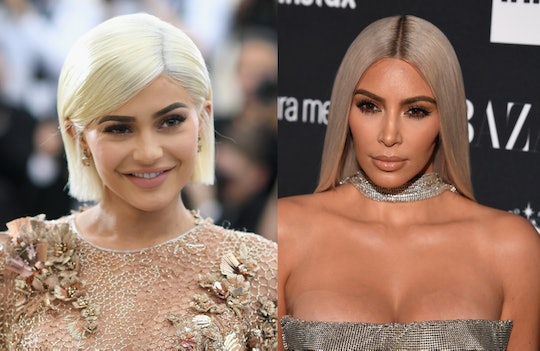 As the "is she or isn't she" drama of Kylie Jenner's likely pregnancy unfolds, Jenner's story has taken a twist that hits a bit too close to home, namely, with big sis Kim Kardashian West. The rumor about Kim K's response to Kylie Jenner's pregnancy has added a whole other layer of interfamily drama that didn't need to be there in the first place, and is troubling overall. According to People, a source close to Kardashian told the magazine that Kardashian did "not respond well at first" when Jenner broke the news to her. The source continued:

Her first reaction was, ‘Seriously?' She didn’t respond well at first. It’s like she and Kanye had gone on this whole journey to get pregnant for months, and now this happens to Kylie. She teared up. It definitely took a lot of time for her to process it.

I've been there, Kim, and it sucks. But it appears as though rumors of her reaction to Kylie Jenner's pregnancy have been greatly exaggerated: On Twitter, Kardashian appeared to have dubbed the rumor — as repeated by Harper's Bazaar — as "fake news." Even if this is all just celebrity gossip, it actually does a huge disservice to anyone struggling with infertility.

First, let me just address and validate the very real, very deep pain that comes with coping with pregnancy announcements when you're dealing with infertility. I can completely relate to Kardashian's rumored reaction, because I've been there myself. Even after the birth of my son, I still struggled with pregnancy announcements — even back when Kate Middleton announced she was pregnant with her second child:

Before I can even help it, there’s that lump in my throat, the feeling of the floor dropping out from underneath my feet, the pull in my stomach, the sting of a tear at the corner of each eye – those all-too-familiar feelings from even my darkest days following my infertility diagnosis. I’m taken aback at this strange, confused flush of emotions while my own 15-month old son sits in the backseat of the car.

Kardashian could be experiencing the same conflicting emotions: Even though she has Nori and Saint, her family isn't complete — and that longing for a third child is real and valid no matter the fact that she already has children. Secondary infertility can be just as emotionally devastating as primary infertility. But her tweet in response to the rumor seems pretty clear cut that she's calling bullsh*t on the whole story (or even Jenner's pregnancy entirely, but who knows right now).

Here's where the rumor about Kim K's reaction gets especially problematic: It paints Kardashian as yet another bitter woman dealing with infertility, feeding into a tired, disparaging, and minimizing trope about women. I could practically start a campaign just based on the concept #NotAllInfertiles, but potentially false or perhaps embellished stories like Kardashian's reaction to Jenner's pregnancy simply hurt the infertility community rather than help it. Yes, it's important that people understand that pregnancy announcements can be emotionally jarring for people struggling to conceive — but not at the expense of perpetuating stereotypes about women experiencing infertility.

Women with infertility are often labeled as jealous, resentful, and bitter, especially in opposition to the happiness of other women who have no problem getting pregnant. While feelings of jealousy, resentment, and bitterness are completely normal when someone is going through infertility, they do not automatically characterize and define that person's entire infertility experience.

Worse still, women with infertility have been depicted as baby hungry monsters who will go so far as to kidnap other people's babies. These stereotypes grossly distort far more complex emotions — but then again, that's why stereotypes persist: They're easy to digest and it's just as easy to write people off based on stereotype alone. And that's exactly why this rumor about Kardashian just feeds the beast about how people with infertility should or shouldn't feel.