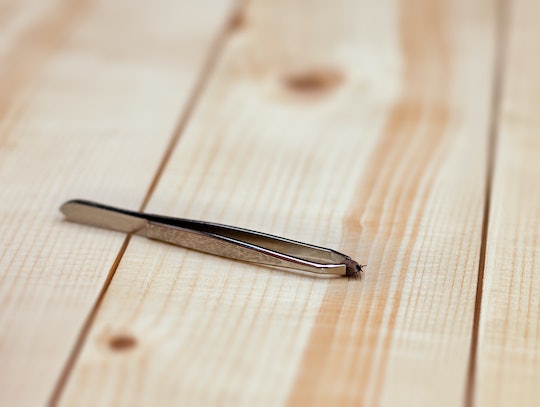 The Safest Way To Remove A Tick From A Baby, According To Experts

Maybe you’ve spent some quality family time by the river, or perhaps you live on wooded property. Once you’re back from your adventures, you notice a strange little black dot on your baby when you’re giving them a bath that evening. Upon further and closer inspection ... Oh. My. God. That tiny dot has legs, and it’s a tick. So what's the safest way to remove a tick from a baby? Should you seek medical attention immediately?

Dr. Nancy Troyano, entomologist and director of technical education and training for the family of pest control brands Western Exterminator, Presto-X, and Ehrlich, tells Romper in an email interview that obviously, you should try to remove the tick immediately. "Every minute the tick is attached increases the chance of pathogen transmission (should the tick be infected)," she says.

What kind of pathogens are we talking about here? Pediatrician Jarret Patton tells Romper that "the two most common diseases found in the U.S. are Lyme disease and Rocky Mountain spotted fever. Lyme disease is a bacterial infection that is acquired from the deer tick in the eastern and northern U.S. primarily. Rocky Mountain spotted fever is another bacterial infection found most commonly in the southeastern and south central U.S."

According to Patton, both illnesses cause a rash and can be treated by antibiotics. But it's important to remove that tick as soon as possible because, "after a tick attaches to your skin, it can transfer the bacteria into your bloodstream after regurgitation," he adds.

Yes, that’s totally gross — but before you try to instinctively yank that tick out of your baby, it’s important to follow steps to ensure you remove it entirely. You don’t want to leave the tick’s head in there.

Both Patton and Troyano recommend using tweezers to grasp the tick by the head, as close to the skin as possible, and gently pulling straight up, without tweezing. It’s really important you pinch the head and not the body, because according to Troyano, "Grasping the tick by the abdomen (the "fat" part of the tick) could potentially squeeze pathogens from the tick right into the bite site." And that’s definitely not good.

If the thought of removing a tick from your squirming baby with tweezers gives you the heebie jeebies, you can try the Tick Twister, which can be found at your local pet store or online. As a side note, even though I've only used it on my dogs, I can vouch that this product is pretty spectacular and does the guesswork for you when trying to pinch the head just right and not squeezing it. And even better, the nasty tick stays in that scoop for you to dispose of it, and you don’t have to touch it at all — not even with a paper towel.

So now that the tick is removed, how should you dispose of it? Troyano suggests putting it in a sandwich baggie that zips, or a jar, especially if you want to get the tick properly identified. "Different tick species are associated with different disease-causing pathogens. Local health departments and extension services from universities often offer this service free of charge," she says. "Symptoms of tick-borne illness typically occur within a few days to a few weeks after a tick bite."

Should you be worried if you’ve found a tick on your baby, even if you successfully removed it and its head? According to Patton, "If you identify and remove a tick from your baby before it has been attached for more than 48 hours, there is a very low possibility of contracting these illnesses."

If the tick looks like it’s been on there a while — the tick will look huge and swollen — you may want to get your baby checked out. Dr. Amesh A. Adalja tells Romper that depending on the tick, they can cause many different medical conditions. "Many infections can be spread via ticks including Lyme disease, babesiosis, Rocky Mountain spotted fever, Powassan virus, anaplasmosis, ehrlichiosis, and others … some ticks can also cause paralysis while attached and recently certain ticks have been linked to the development of meat allergies," he says. "You should contact your doctor as soon as possible if you notice [your baby] experiencing any unusual symptoms such as a fever, rash, or [observed] joint pain."

Enjoying the great outdoors means being one with nature. And unfortunately, that includes bugs. When you come back inside from hiking or even playing with your kid in your yard, be sure to check your child (and yourself) out for ticks hanging on for a ride. Remember, they like damp crevices and cracks, so be sure to check thoroughly all over.

More Like This
Is It Good For Babies To Be Exposed To Germs? It’s Complicated
When It’s Safe To Bring Your Newborn To A Restaurant, According To A Pediatrician
Can You Burp A Baby Too Hard? A Pediatrician Shares Tips For Gassy Tummies
Can You Give A Sleeping Baby A Breathing Treatment? Experts Explain