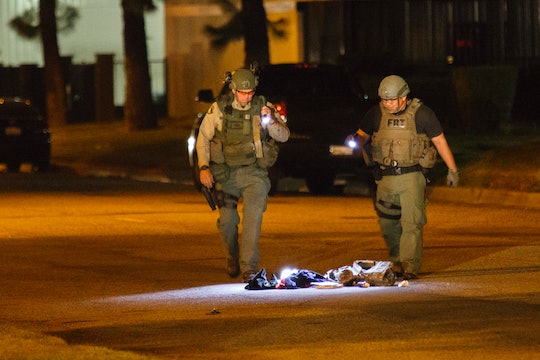 The San Bernardino Shooters' Identity Could Fuel Islamophobia, & That Is Tragic

In the wake of the horrific mass shooting in San Bernardino on Wednesday, I dreaded the moment when the suspects were identified. I swallowed hard when I realized Syed Rizwan Farook and Tashfeen Malik were of Middle Eastern descent. I wasn't thinking that this shooting could be the work of ISIS or about copycats or that my city “might be next.” I was worried for my Muslim friends, and for all Muslim Americans. I was worried about how we — as a country — can, and probably will, use San Bernardino to further fuel Islamophobia.

We do not know much about Farook or Malik, at least not yet. We do not know where they are from. Farook's online dating profile states that he is religious, but we do not know what he believes. But it doesn't even matter. I repeat: It doesn’t make any difference what their backgrounds are. These people are suspected killers, plain and simple. Not only does focusing on their religion or ethniticty take our attention away from what is important — i.e. helping the survivors and families of those affected by this horrific event — it only furthers the belief that we should be wary of Muslim Americans because they look a certain way, or worship a different God.

America's anti-Muslim hatred has reached a fever pitch. I can recall only one other moment in my life when American Muslims faced such hostility and discrimination: 9/11. But even then, the Muslim community had the support of its leaders. President George W. Bush visited a mosque in Washington, DC a few days after the attacks. He spoke of Islam as a peaceful religion, noting that:

...[T]hese acts of violence against innocents violate the fundamental tenets of the Islamic faith.

He implored all American's understand that, and he asked them remember it.

But the same is not true today. Many politicians — including Ben Carson and the always outspoken Donald Trump — see Islam as part of the problem. They continue to incite terror and fear with their “control plans," and they stoke the Islamophobia fire with their words, their proposed policies, and the “protective procedures.” But here’s the truth: Islam is not the problem. The country you are born in, or immigrate from, is not the problem.

But if you really believe you can — and must — judge a book by its cover, then judge this. According to NBC News, “there have been more mass shootings [this year] — defined as incidents in which four or more victims are shot — than days in the calendar year." According to ShootingTracker.com, which tracks deaths by guns in America, the U.S. has seen 355 mass shootings so far in 2015. And if you look up the perpetrator(s) in each incident, you will see only a handful of these shootings were committed by those who identify/identified themselves as Muslim.

So let’s stop talking about religion like it is the problem. Let’s stop asking questions about it at press-conferences and on daytime TV, and let’s start asking the ones that matter, like when will all this violence stop? What can we do to make it stop?