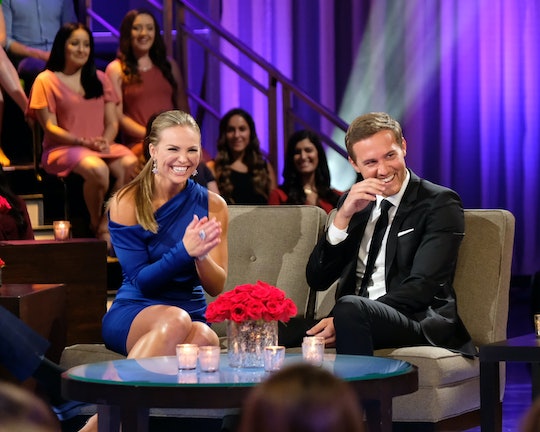 Your Next 'Bachelor' Has Arrived & He Might Be A Surprise

As Bachelor in Paradise wrapped up its sixth season with three proposals, viewers waited with bated breath for the after show, where they learned who the Season 24 Bachelor would be. Although there were a few well-supported claims to the throne — Mike Johnson, Peter Weber, and even Derek Peth as a potential wildcard pick — the title eventually went to Peter, the 28-year-old pilot and windmill hookup prince Bachelor fans have no choice but to stan.

"I have truly my entire life looked forward to finding my girl and that person I cannot wait to spend the rest of my life with," he said when Chris Harrison introduced him in front of the live audience. "I have all the faith in the world that this can work for me and I know it's going to."

Peter was a running favorite on Hannah Brown's season of The Bachelorette, and Hannah herself admitted when she cut him in the final three that when she imagined her dream husband as a little girl, Peter was it. But as a grown woman, Hannah decided to pursue a riskier, more complex love and, well, viewers know how that turned out for her.

For his part, Peter had nothing but kind things to say about his former Bachelorette, admitting on the BiP reunion, "Hannah was amazing — she is amazing — and I learned a ton from her." He added:

I think what I really respected about her the most was, from night one with that first toast till the very end when I said goodbye to her, she was 100 percent unapologetically herself, and I loved that. That's something that I definitely want to carry forward with my journey now. That's what it takes to really find your person in this process.

The good news is, fans who were looking for a wholesome, kind, cookie-cutter Bachelor got their wish. It looks to be a very by-the-books season, which is sure to be a comfort to viewers who want to get back on track after a couple of tumultuous ones. From Colton basically blowing up his season by cutting everyone during fantasy suite week to jump a fence for Cassie to Hannah's scandal-mired season, it's been an unconventional year, to say the least.

When fellow Bachelor frontrunner Mike (who has since found himself romantically linked to Demi Lovato) was quizzed on who he thinks the next Bachelor might be, Peter was his pick, too, though he managed to cast some very subtle shade.

"I think the Bachelor will be Peter," he told Entertainment Tonight correspondent and Chris Harrison's girlfriend Lauren Zima. "Based on: history repeats itself."

He went on to say, "I think that Peter looks the part. [The Bachelors] have like, a similar look and I think Peter looks like he could be the Bachelor."

In other words, Peter, like every Bachelor who has come before him, is also white. (Had Mike won the title, he would have been the franchise's first-ever black Bachelor.) But he was generally supportive of his castmate from Hannah's season, saying: "I think Peter that would be a good Bachelor. I think that he would be a safe Bachelor, meaning that he won't do anything crazy, obnoxious. I think it would be a good, safe, clean season if he were to be Bachelor."

Looking back over the events of the past season, perhaps nothing tipped off fans as to who the next Bachelor might be quite like Peter's parents. In general, looking at the family edits during hometown dates and beyond can be a huge clue as to who the next star might be. Who could forgot JoJo Fletcher's mom's infamous champagne swig during her hometown date with Ben? Peter's parents got an extremely cute edit during "After the Final Rose," in particular when Hannah decided to share with the world what a hot fantasy suite date they had. Rather than get squicked out by their son's sexual prowess, Peter's parents cheered, showing the extent of their unwavering support for their son. Bachelor audiences love wholesome family vibes, so it's not that big a surprise Peter is the next lead.

Peter's season of The Bachelor is slated to kick off Jan. 2020 on ABC.