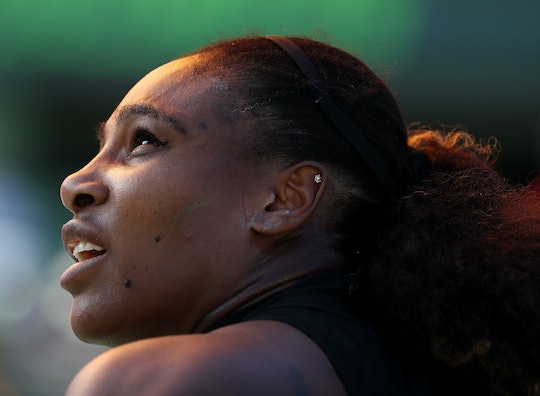 The Trailer For Serena Willams’ Docu-Series is Goosebumps-Worthy

Following the birth of Serena Williams' daughter in September 2017, many fans wondered if she'd give up her tennis career for motherhood. Although this is an unfair question to ask (men typically don't have to deal with this type pressure) Williams felt the need to address it in her HBO docu-series, Being Serena. The series, set to air on May 2, will cover everything from Williams first thought upon learning she was pregnant to her incredible journey back to the tennis court post-delivery. And in anticipation of the project's upcoming premiere date, HBO gifted fans with the trailer for Serena Williams' docu-series on Monday. Needless to say, the trailer is as inspiring *a lot* of parents.

Last Wednesday, Williams lost the first round of the Miami Open to 20-year-old tennis star Naomi Osaka, according to CNN. The defeat marked Williams "earliest-ever elimination from the tournament," according to Vogue, and the loss prompted an important discussion on how the Women's Tennis Association can probably do a better job of supporting parents.

As for Williams, she handled her defeat with a lot of class. “Every tournament is an opportunity for me to better understand the areas I need to improve to be my best,” Williams said, according to HuffPost. “Naomi played a great match and I learn something each time I play. I look forward to continuing my return by progressing every day. I’m so grateful for my fans who continue to support me every step of this incredible journey.”

And it's true that Williams is always striving to be her "best." In fact, Williams says as much just 11 seconds into the Being Serena trailer. “I put so much pressure on myself. I wanna make sure that I’m the best,” Williams admits before the footage cuts to her working out while pregnant, according to Entertainment Weekly.

But as much as Williams' physical endurance is inspiring (seriously, girl is strong) it's her ability to overcome self-doubt that's especially moving. In one particularly poignant portion of the vid, William pensively gazes out of a window as she recalls the moment she learned she was pregnant. "When I realized that I was pregnant I was like, ‘Oh my God. How am I going to play?’" Williams shared, according to People. Following the honest admission, the trailer flashes to clips of Williams handling the ups and downs of her journey like a boss. Translation: Williams has got this.

Williams, who also shared the trailer on her personal Instagram account, was flooded with messages of encouragement and praise following its release.

"You’re such inspiring role model for all the women out there," one person gushed.

Another fan chimed in: "I have chills @serenawilliams! You are truly amazing, such an inspiration."

"Such an incredible role model! Truly owning her power," someone else added.

"I hope you're not done. As a female athlete (of a sport that I couldn't go pro in) I struggle with not being that anymore," a follower argued. "Regardless, being a mother shouldn't hinder you from being even better than you've been. You'll probably be Even Better than EVER."

There's a good chance Williams appreciates the love and support from her fans, especially since she admitted in January that she struggles with self-confidence at times. Williams revealed, according to Glamour:

Sometimes I get really down and feel like, Man, I can't do this. That's that same negative attitude I have on the court sometimes. I guess that's just who I am. No one talks about the low moments—the pressure you feel, the incredible letdown every time you hear the baby cry. I've broken down I don't know how many times. Or I'll get angry about the crying, then sad about being angry, and then guilty, like, Why do I feel so sad when I have a beautiful baby? The emotions are insane.

Whether you're a fan of Williams or not, it's not too difficult to see why her story is inspiring so many people. Williams, like many other parents out there, is doing the best she can to overcome the challenges of returning back to work postpartum. And making matters even more powerful is that she's choosing to share her journey with millions of people.