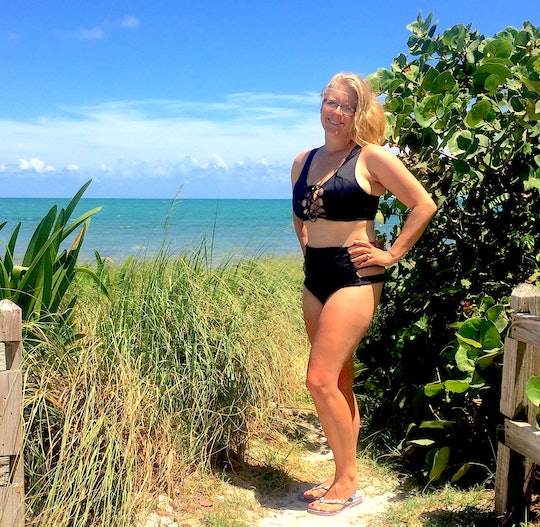 The Bikini That Saved Me Postpartum

When I was younger, I lived for bikini season. I love the sun and the water, but also, to be honest, I always thought I looked smokin’ in a bathing suit. I got boobs earlier than the other girls did, which was both a blessing and a curse. I quickly went from being known as “that funny girl with blonde hair who was always nice to people” to “the girl with the big boobs.” So that’s who I became: just the girl with the big boobs.

When swimsuit season came around, it was time to show off my best assets. I pranced around the pool in my bikini, never understanding why the other girls weren’t as excited to lay out in the sun. I was an overconfident young girl without the foresight to realize those days would be short-lived. I felt amazing, and I loved my body.

Then I gave birth, and everything changed. For years, I refused to wear a bathing suit in public — until I found the two-piece bikini that gave me the postpartum confidence boost I needed.

After my body did the most amazing thing it’s ever done — create and birth a human being — I went home from the hospital in maternity pants. I was convinced I’d be back in real jeans in no time.

But the first time I looked in the mirror after I gave birth, I cried so hard my stomach hurt. I was so swollen and scarred that I didn’t recognize myself. I'd seen my own mother's scarred post-baby body plenty of times, but I'd somehow internalized the idea that after I had a baby, I would "bounce back" just like the celebrities whose perfect, taut bodies were displayed on magazine covers.

I somehow managed to get a single lightning bolt stretch mark in the dead center of my crotch. It looked like Harry Potter had been crowning for three hours.

I hadn’t seen any stretch marks — or my feet, for that matter — during my entire pregnancy. But in the hospital, they’d given me so many fluids that my legs swelled to the size of healthy baby elephants. I got stretch marks on my belly, thighs, and even my calves. I wouldn’t know until the swelling went down, but I somehow managed to get a single lightning bolt stretch mark in the dead center of my crotch. It looked like Harry Potter had been crowning for three hours.

Because there was now physical evidence that I'd carried a child for 40 weeks, I hated my body. I never considered myself a vain person, but there was no chance I’d ever go swimming again. I decided I'd have to sit by the pool in my Save the Manatees t-shirt and hope no one tried to roll me back into the water.

I had a summer baby right in the middle of swimsuit season, and we took a trip to Florida when she was about 3 months old. When it came time to buy a swimsuit, I found the biggest red and black tent they had. I thought maybe I could let my husband hold the baby, and I could hold my belly and pretend I was still pregnant.

She showed up with a Victoria’s Secret number with plenty of strings and not a lot of fabric. I told them I was only going to try it on so we could all have a laugh before I went down to the pool in a t-shirt. But I’ll be damned if Victoria secretly surprised the hell out of me.

We made it to Florida, and my ego took another hit when I met up with Jenni, who's one of my lifelong best friends. Jenni has two kids, but she looked exactly like one of those celebrities on the magazine covers. We went to the pool together to get my first postpartum margarita, and it was so good to see her that I almost felt comfortable in my swimsuit. We posed for a picture together holding our babies, and I didn’t look at it until later. Thank God I waited, because when I saw it I cried. I just didn't look like myself at all.

I had my second daughter a few years later, and continued to wear one-piece bathing suits and big flowy cover-ups all summer. Then a few years after that, I gave birth to another baby as a surrogate for another mom. In my totally rested, non-stressed, baby-free recovery, I was able to begin to see the beauty in what my body had done, and I started to realize that it might be kind of awesome after all.

The year after I gave birth as a surrogate, I went back home to west Texas for a visit. It was the beginning of summer, and we invited my cousins and aunts to our hotel pool for an impromptu Memorial Day pool party. I hadn’t planned to swim, so I didn’t have a suit, but my glamour puss aunt said she’d bring me one. That lady got married in a white string bikini on the lake, so I doubted she had anything that would even cover my ass by legal standards. But she insisted.

I tried on that bikini, and for the first time in 8 years, I didn’t cry.

I assumed she had a decent one-piece, or a suitable tankini. But she showed up with a Victoria’s Secret number with plenty of strings and not a lot of fabric. I chuckled and told them I was only going to try it on so that we could all have a gut-busting laugh before I went down to the pool in a t-shirt.

But I’ll be damned if Victoria secretly surprised the hell out of me. I don’t keep up with fashion trends, so I had no idea that high-waisted bikinis were in. Nor did I realize that they made a waist high enough to cover my midsection. It had slits on the side to give the illusion that I was super comfortable showing skin, but it also had a magical panel in the front that came up just high enough to cover my stretch marks.

I tried on that bikini, and for the first time in 8 years, I didn’t cry. I looked — dare I say it? — awesome. I threw on the mesh cover-up and cautiously strolled out to the pool. My husband went on and on about how sexy I looked. But I think he’s contractually obligated to say that.

I snapped a quick poolside pic with my fam, then I took off the cover-up and went to get in the water. For the first half hour, I swore everyone was staring and judging me. But I soon realized no one cared. Literally no one was looking at my body. They were all either just as self-conscious as I was, or they were just there to have fun at the pool. I left all of my worries about my post-baby bod in that hotel room that day.

I’ve done something with my body that has made a difference in the world. And I now walk around the pool proud of my body for what it can do, not for what other people can see.

I’m so glad I found this postpartum bathing suit not because I'm convinced I look amazing in it, but because wearing it helped me get back to the place where I don’t care what anyone thinks but me. I have a new appreciation for my mom-bod and what it's capable of. I’m in my 30s and I’m no longer just “the girl with big boobs.” (And even if I am, hey — those big boobs have nourished two babies.) I am funny and witty, and I like to help people in big ways. I’ve done something with my body that has made a difference in the world. And I now walk around the pool proud of my body for what it can do, not what other people can see.