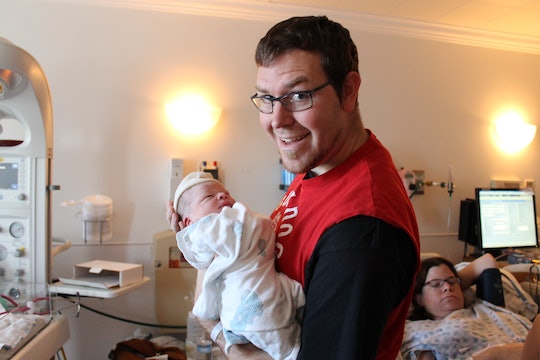 Before we had a child of our own, my husband was never a baby person. That’s probably a bit of an understatement. Let me clarify: He'd held a baby maybe once in his life. There are countless things he’d rather hold than a baby. An icy cold drink. A slice of pizza. A remote control. His phone. A boob. Just not a baby. And don’t even think about asking my husband to babysit, or change a diaper.

When I was pregnant with our first child six years ago, I didn't know what to expect from my husband, because he wasn't a "baby person." Fortunately, however, I quickly learned there was no need to worry. Because once I saw my husband lovingly cradle our newborn son's fragile head as he gave him his first bath at a few days old, I knew he was going to be a great dad.

Like many first-time moms, when I first found out I was pregnant, I read every baby book and childcare article I could get my hands on. I read about techniques for soothing the baby. I read about making baby food, even though my idea of cooking is heating up chicken nuggets. I took notes all over a baby name book I'd picked up at the bookstore, circling options and running them by my husband. He'd half-heartedly listen as I read names aloud to him, rejecting my favorite monikers since childhood.

At that point, the baby didn't truly exist to him yet. He knew I was pregnant, but didn't fully grasp that there was an actual human growing inside of me.

At that point, I was starting to suspect that my husband wasn't as excited about the baby as I was; in fact, it started to seem like he didn't really care, because at that point, the baby didn't truly exist to him yet. He knew I was pregnant, but didn't fully grasp that there was an actual human growing inside of me and what that would entail for us both.

"Aren't you excited about the baby?" I'd ask him. "Sure," he'd mumble unconvincingly.

That's not to say that the pregnancy was unplanned or unwanted on his end. We'd agreed together to start trying for a family, because my husband always said he wanted "at least one kid," despite his lack of experience with children. He was an only child and never spent much time around young children. His father was absent from his everyday life, and he only saw him every few months. He said he wanted a child to make up for the relationship he lacked with his father. He wanted to be the good dad his father wasn't.

We stared at our newborn son as if we were zombies, struggling to believe that the handsome baby with his daddy's expressive eyebrows was really ours.

While I admired my husband's intentions, I still had my doubts up until the baby was born. Maybe he needed a therapist to work out his daddy issues, I reasoned. But was it a good idea for us to have a kid?

When my son was born, my husband and I were both exhausted after the long, arduous labor. We stared at him as if we were zombies, struggling to believe that the handsome baby with his daddy's expressive eyebrows was really ours. The hospital didn't allow my husband to spend the night with us, so my husband went home that night and I stayed with our son, bonding with him over late-night diaper changes and midnight feedings.

Once I was home, I continued to spend more time with the baby than my husband did, since I was nursing him. But my husband stepped up to help out whenever possible. He had perfected the "shush" sound and jiggling motion that soothed our baby, and we took turns lying next to our son as he rocked in his baby swing at night while we tried to lull him to sleep.

Several days after our baby's birth, I knew it was time to give him a bath, but I was wary of handling his slippery little body. Without a second thought, my husband filled a container with perfectly warm but not too hot water, set the baby tub on the bed and carefully lowered our son in.

At that moment, I knew then that even though my husband lacked experience with kids, and even though he had a poor example of a father's love, he was going to be a great dad.

Despite my husband's lack of experience with babies, he expertly maneuvered our delicate newborn son in his large hands. He gently and lovingly wiped him with the washcloth and the water from the container, remembering to clean in all the adorable little baby creases as our son looked up at his dad trustingly.

When our baby was all clean, my husband wrapped him tightly in a towel and rubbed his fragrant, fuzzy little head dry. He then buttoned him into his warm and cozy jammies without a hitch.

At that moment, I knew then that even though my husband lacked experience with kids, and even though he had a poor example of a father's love, he was going to be a great dad.

Despite my initial concerns, my husband was armed with a willingness to learn about parenthood as he went, and he was more than well-equipped to handle whatever lemons parenthood would fling our way. Today, my husband and onur ow 5-year-old son have an unbreakable bond, and my husband also enjoys a loving relationship with our 1-year-old daughter.

My husband is a clear example that good dads aren't born. They are made, molded by their love for their children and their commitment to do better. He might not be a "baby person," but he is a person with a natural way with his own children, and that's what really matters.