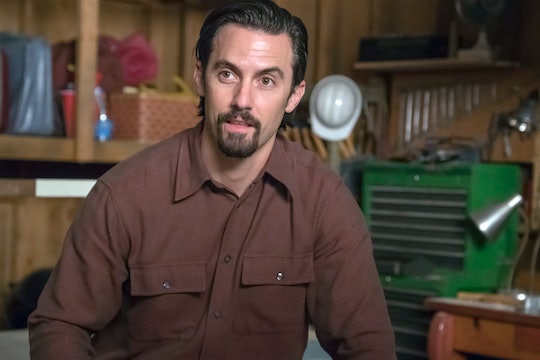 Watching the multi-generation story of the Pearson family on This Is Us has shown viewers that, in life, it really is the little things that matter. And it's the little things that can sometimes change the course of history. Take, for instance, the smoke detector clue on This Is Us, which adds yet another big detail to how Jack died, since it’s likely not going to be as simple as perishing in a house fire. In Tuesday’s episode "Clooney," one of the first scenes featured was from the past, which showed Rebecca asking Jack to remind her to buy batteries when they take the kids to the mall. It’s something so harmless and easy for viewers to overlook. (I, myself, almost did.) Initially, it doesn’t seem like forgetting such a small item would signify a life or death situation, but again, it's the little things — and these batteries turn out to be very important.

Then, at the end of the episode, Rebecca asked Jack if they forgot anything they needed at the mall, to which he innocently replied that no, they didn't. But then the camera panned up to the smoke detector, which clearly had no new batteries inside of it. In fact, it clearly had no batteries in it at all. While at first it was unclear what the batteries were even for or if they were important, by the end of the episode, you know that they were meant for the smoke detector. And since we all know that by the time Jack dies on This Is Us, the house is a shell of what it used to be thanks to a house fire, this might be one of the biggest details about Jack’s death and the house fire that we’ve seen yet.

Based on everything we know so far, it's safe to say that Jack's death is somehow connected to the house fire. Whether he died in the fire itself or died later due to fire-related injuries (i.e. smoke inhalation) remains unclear. But the fire definitely plays a huge factor, which makes the absence of a working smoke detector all the more relevant.

The point of a smoke detector is to alert you of a fire before it spreads too much or gets out of control, but if the smoke detector in their house didn't even have batteries, then the fire could spread a substantial amount before Jack is able to get everyone out of the house. This means that Jack suffering from smoke inhalation is very possible. Of course, this one small detail about the house fire on This Is Us doesn't tell viewers everything, but it’s definitely an important clue. It also supports some of the theories that have already been circulating about Jack’s death.

Time.com wrote about a theory that suggested that Jack died after the fire rather than in the fire, especially since at his funeral, Kevin didn’t seem to have a cast or crutches even though he did shortly before the events that led to the fire. According to the theory, "Maybe Jack was injured in the fire and was taken to the hospital, where he later died of complications due to smoke inhalation or something similar."

Reddit user Loversinner posted a similar theory that mentioned smoke inhalation as a possibility, but added another twist to it: "What if [Jack] doesn’t die in the fire or due to smoke inhalation, literally? What if he heroically runs into the fire for whatever reason, is hospitalized for smoke inhalation, and while he’s being treated for it, they find a preexisting condition of sorts, perhaps Cirrhosis?"

It’s going to be a little while longer before we know everything about Jack’s death and the events that led up to it, but the smoke detector clue is just one more big piece of the puzzle.