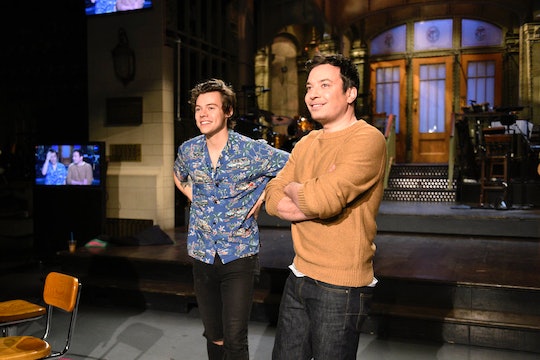 Sometimes the best Saturday Night Live sketches are the most random, not timely or political ones. This week's turtle shirt skit on SNL is proof of that phenomenon. It's so weird, but you're going to want one. The concept behind the turtle shirt is simple. It's a shirt that's made from the same material as a turle's shell, so when you say something totally awful and cringeworthy (without meaning to, of course) in public, you can just shrink yourself into a collared button down shirt and disappear into it, just like a turtle. FYI, they don't recommend you lie on your back in one, as it might result in death.

It's a pretty relatable concept and so much more effective than just a simple face palm, or booking it out of the room as soon as humanly possible. Making the sketch even more hilarious was that they set every "shrink" moment to Snake and Lil' Jon's "Turn Down For What." If turtle shirts were real, that would have to be the song that played in your head as you shrunk. Actually, now you're going to get the song in your head every time you make a social misstep in public. I'm really sorry about that.

Amazing, right? Viewers on Twitter were into it. "I'm so awkward, I need a turtle shirt, " one fan tweeted. Another said they needed to stock an entire closet full of them. I totally get that.

Overall, the Jimmy Fallon hosted episode brought together a lot of the greatest things about SNL. Not only was there a great musical guest in the form of former One Direction member Harry Styles, but there were also So. Many. Good sketches. It's not every week that SNL does such a good job at lining up hit after hit. After Fallon's killer cold open and opening monologue, where he and Styles performed David Bowie's "Let's Dance," of all the glorious things, Fallon had a few other musical bits.

There was the "Truly Madly Deeply" sketch in which he attempted to win back a girl and the pretty hilarious Union Army sing-a-long where Fallon and Styles created "the perfect hook" for an old-timey Civil War era tune. Later, former SNL star Rachel Dratch showed up to play an uncouth mom from Boston taking a tour of Harvard with her husband, played by Fallon. Toss in the turtle shirt ad, two great performance by Harry Styles, and it was a good week for SNL.

But we are going to want to get our hands on one of those turtle shirts right away. Please?