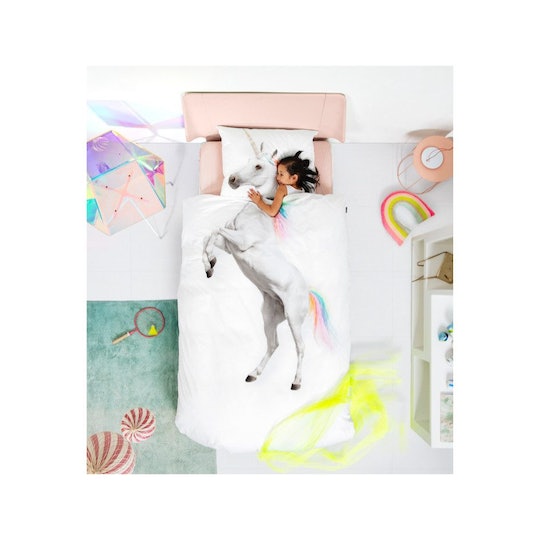 This Hilarious Duvet Turns Kids Into A Unicorn Rider, & Now I Want Some For My Bed

My parents never went in for specialty bedding when I was a kid. So I was always rather envious when I’d go to a sleepover, and would be invited to stretch out upon a friend’s tastefully-patterned Scooby Doo sheets. I’d be dazzled when handed a pillowcase bearing the visage of The Little Mermaid, herself... that all seems so quaint and old school now, when the new Snurk unicorn duvet set turns a child into an actual unicorn-riding human. Or at least, makes them look like one when prone.

Behold, the whimsical, hilarious designs of this Amsterdam-based company. Snurk (Dutch for snore) has created a line of bedding that feature huge photographic portraits of everything from mermaids to fairies to superheroes to soccer players. The body of the creature/person/animal appears on the duvet, while the head is printed on the pillowcase. The overall effect when a child tucks in for the night is that of their little face appearing on top of the design. So the kid looks as if they have a mermaid body, or (for little Jaws-lovers who prefer night terrors) being eaten by a shark, or in a magical way of riding off to dreamland, saddled up on a unicorn.

They materials are "100% high quality soft cotton" (because who wants to ride a scratchy polyester unicorn?) and are crafted in Portugal. The company uses "high quality percale and percaline cotton, depending on the print," and they also "comb the yarn to avoid impurities and peeling," thus ensuring the monkey your child is snoozing on top of is free of harmful substances.

A twin set prices at $119, but they're also available in queen/full for $149, in case one would like to fancy up the guest room and force Grandma to feel as if she is being consumed by a Tyrannosaurus Rex.

The idea came from some parents (Peggy van Neer, Erik van Loo, Chris Kyle, and Martyntje van der Linden Kyl) who were hanging out together at the playground. Which I find impressive, as most of my playground ideas involve: "How do I make getting off the swings and going to the wine store sound fun?" or "What if there were coffee you could just inhale?"

The Snurk designs are quirky and clever, and I must admit, some of them made me lol. (The one that turns the sleeper into an equestrian star is pretty genius.) They unfortunately did also make me think of that terrifying Nicholas Cage bedding set (for when one never wants to sleep again), but if one can blot that image of their mind and just focus on the cuteness of their snoring, drooling child's face perched above an elegant ballerina body, well, then I think Snurk is a win.

And while I applaud their quest to make bedtime more fun, and less of a nightly screamfest, I do foresee a long evening ahead upon the initial unveiling of a child's exciting, transformational new blankets. Parents should probably prepare for a solid hour of their kid making rocket booster noises while forcing Dad to screech like an alien, as the whole family circles Saturn yet one more time... Just one more time! OK, no, really, this is the last time, got it?