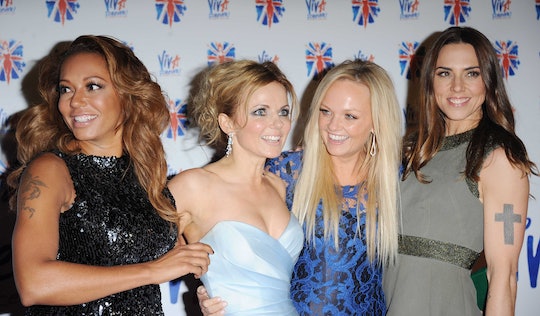 The Spice Girls Are Officially Back, Proving Friendship Really Doesn't Ever End

The other night at Karaoke, two of my friends got up to do a killer rendition of "Wannabe" by the Spice Girls. They were excellent, especially after a glass or three of Pinot Grigio, but honestly it just made me nostalgic for the originals. Made me long for the days of Girl Power, belly tops, running pants and Union Jack body suits. But I figured you can't go back in time... happily, I was wrong. Because the Spice Girls are officially back, proving friendship really doesn't ever end.

The original Spice Girls, Victoria Beckham, Geri Haliwell, Emma Bunton, Melanie Brown and Melanie Chisholm, haven't performed together since the closing ceremonies of the 2012 Olympic Games in London, England. Before that, the pop group formed by manager Simon Fuller in 1996 hadn't been together properly since 2002 when they broke up and made every girl cry themselves to sleep forever. That's an incredibly long time to go drifting through life without girl power, guys, and it's been a struggle. It's hard to find your inner diva when Posh Spice, Ginger Spice, Baby Spice, Sporty Spice, and Scary Spice just turned back into regular people. The ladies were great on their own, of course, but honestly they need to be together doing joyful, choreographed dancing to give a scope of the full extent of their magic.

And it looks like we might not have to wait much longer for this to be our new reality.

For years, all seemed lost. There were the odd rumors that the Spice Girls might get back together (although Victoria Beckham generally seemed to be something of a hold out); there was even a rumor that three of the original five members might form a spin-off group called GEM (for Geri, Emma, and Mel C.), but that never came to fruition.

But suddenly, the clouds lifted and out came the sun. The five women sat down together at Geri Horner's (formerly Haliwell) home for a "little catch up," as Mel C. told BBC Radio 2:

It's the worst kept secret in showbiz always. It was lovely to get together, so we are talking about opportunities, ideas we have for the future... but you know, it's early stages and there's nothing set in stone, there is no big announcement.

After the five women sat down together, with former manager Simon Fuller on tow, they released a joint statement that really spiced up my life:

We have enjoyed a wonderful afternoon catching-up and reminiscing about the amazing times we have spent together. We are always overwhelmed by how much interest there is across the whole world for the Spice Girls. The time now feels right to explore some incredibly opportunities together. We all agree that there are many exciting possibilities that will once again embrace the original essence of the Spice Girls, while enforcing our message of female empowerment for future generations.

So that's the good news, everyone. They're looking into opportunities. The slightly bad news is that no one has shared what sort of opportunities they might be looking into. If it matters to anyone in the world, I would like to put my vote on for:

We'll have to wait and see what the Spice Girls are planning to come up with to reignite the brilliant flame that was Girl Power. For now, it's simply enough to rejoice in the knowledge that yes, history can miraculously repeat itself if we wish hard enough