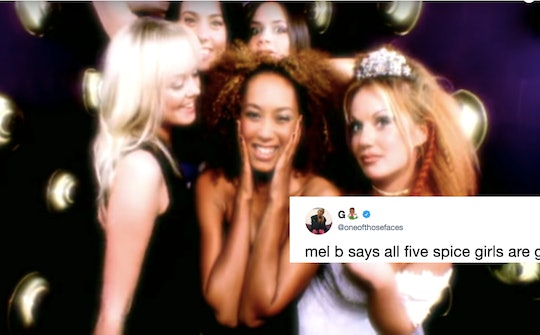 Get Ready, Because It Looks Like The Spice Girls Will Perform At The Wedding Of The Year

Every once in a while we get some pretty good news thrown our way, and I say we just enjoy it. Don't question it. Embrace it. According to Mel B. and People, the Spice Girls are reportedly performing at Prince Harry and Meghan Markle's wedding this May. I can't tell who should be more excited in this situation, Meghan Markle, Prince Harry, or all of the Spice Girls. Oh wait a minute, I guess it's the fans. We should be the most excited right now. On May 19, the world will stop while women everywhere eat brunch in Union Jack body suits to pay homage to true girl power. Because we are apparently going back in time and basically everyone is totally and completely OK with it.

During a live taping of The Real on Tuesday, Melanie Brown/Mel B./Scary Spice was asked whether or not she had been invited to the royal wedding, which is set to take place on May 19 (also the day I think I'll be calling in sick, just as an FYI). Mel B. might be one heck of a Spice Girl, but her poker face leaves something to be desired. Because when she was asked about her attendance at the royal wedding, she sort of froze and then let it slip out that "all five Spice Girls" would be going. And now squeal forever.

After spilling the beans that the Spice Girls — Emma Bunton, Victoria Beckham, Geri Halliwell and Melanie Chisolm — had been invited, she wouldn't say what the invitation looked like, One of the three hosts of The Real assumed it looked like a scroll, which is exactly what I was picturing, but Mel. B said:

See, now that's getting too personal if I actually describe it. I'm not saying any more! I've said enough!

While Mel B. didn't officially confirm that the group would be performing at the royal wedding (she clammed up right around the time she jokingly muttered "I'm going to get fired"), it seems like the most obvious assumption to make. Kensington Palace did not comment, but The Telegraph reported that the only invitations that have been posted to the wedding so far have been for performers. And fans are making just such an assumption that the Spice Girls will be playing at the wedding of Prince Harry and American actress Meghan Markle in May.

With mixed feelings, of course, because as much as everyone loves Meghan Markle, she is now living every girl's dream life from the 90s.

In the past few weeks, the Spice Girls have been getting fans' hopes up about possible concerts and new work, including reports of a possible tour to begin at the end of summer 2018, ever since the five were photographed together at the home of Geri Halliwell.

If the Spice Girls are planning to perform at Prince Harry's wedding, it does feel like something of a full circle moment for him. As HuffPost reported, he first met the five women at a charity concert in South Africa after his mother, Princess Diana, died in a car crash in 1997.

There have been rumors floating around the internet of a few different singers slated to perform at the royal wedding in May; Sir Elton John, who recently announced his retirement and "Perfect" singer Ed Sheeran, although he is reportedly in Dublin that night and will not be attending, as E! News noted. In other words, it's a whole lot of smoke and mirrors at this point.