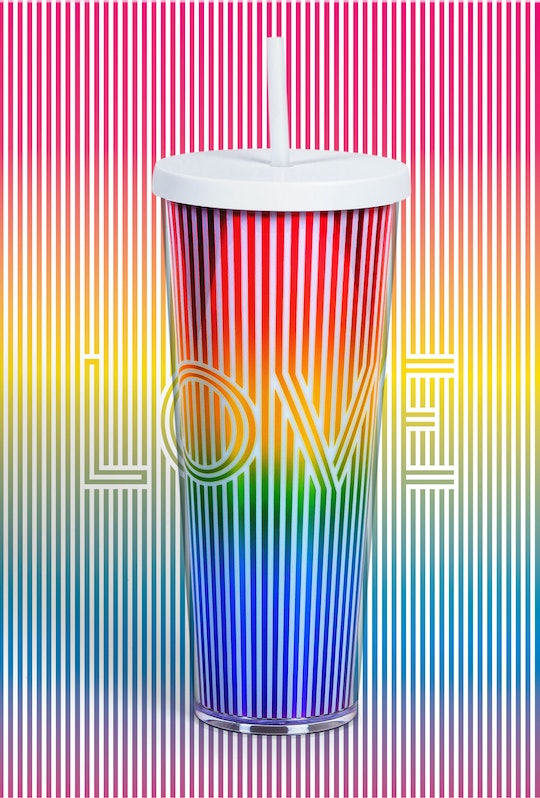 If you have been looking for one more way to show some love and support to the LGBTQ community, look no further than the new Pride tumbler at Starbucks. Just in time for Pride month in June, the rainbow-colored tumbler launches this week, and I'm here to tell you that it is absolutely fabulous.

Each sleek tumbler features an iridescent rainbow striped design emblazoned with the word "love" to celebrate kindness and remind the world that love is a universal language. These cups are meant to hold your favorite cold drinks, so they're perfect for long summer days fueled by iced chai lattes and frosty caramel Frappuccinos. It's the perfect accessory for toting to work or sipping a drink by the pool, and they let everyone around you know that you're an advocate for inclusivity and a supporter of love in all forms.

You're probably going to be more obsessed with this Pride cup than you were with the color-changing reusable Starbucks cups that went flying off the shelves — and that's really saying something. Die hard Starbucks fans recently went crazy over the release of color-changing cold cups that boasted a rainbow of hues and left over-caffeinated fans clamoring for more colorful creations. While Starbucks hasn't had a re-stock of the fan-favorite color-changing cups (yet!), with the release of the new Pride cup, Starbucks lovers can add yet another rainbow-themed cup to their collection. The design isn't over-the-top, but it definitely stands out in a crowd.

The reusable limited edition Pride cold cup retails for $16.95 and will only be available while supplies last. From where I'm standing, I think I can already see the line around the block at my local Starbucks where everyone and their mom is waiting to get their hands on this one-of-a-kind design to help celebrate the 50th anniversary of Pride month.

According to the NYC Pride website, the 50th anniversary Pride parade this year will commemorate the Stonewall uprising and subsequent demonstration in Washington Square Park that occurred 50 years ago and has continued in various forms over the years to advocate for the rights of LGBTQ individuals everywhere. Similar Pride parades will take place throughout the nation. It's a celebration of inclusivity and love that Starbucks is also commemorating with the release of their limited edition Pride cup.

You're probably already familiar with the company's commitment to inclusion and diversity within their company, and with the release of their new Pride tumbler, Starbucks continues to show their advocacy in the LGBTQ community. As a company, Starbucks has paved the way for employers to provide more inclusive healthcare coverage for their employees by providing health benefits that include support for transitioning individuals, as well as providing benefits to partners of employees in LGBTQ relationships.

So, the next time you hit up your neighborhood Starbucks for a double shot of espresso and an everything bagel, remember that you're supporting a business that stands with the LGBTQ community and don't be afraid to sport your new rainbow-colored Pride cup filled with caffeinated Starbucks goodness everywhere you go this summer. Cheers to inclusion, advocacy, and to love!