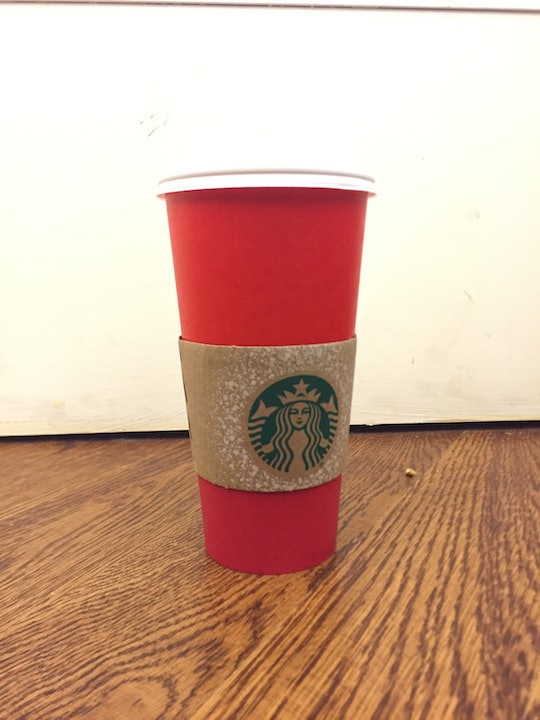 My three children are still too young to read and too young to understand the trending stories that take over the internet one day and fade into oblivion the next. They have no concept of the controversy over the Starbucks red holiday cup or the #MerryChristmasStarbucks storm taking over social media. The video that fueled the controversy and the multitude of rebuttals are completely outside of their radar. The red-cup debacle will be ancient history by the time they're savvy enough to roam the internet, and for that, I am grateful.

Even so, I think there is something to be learned from the rise and fall of this season's most sensational story so far, because there will be other “red cup” issues in their time. There will be moral outrage against the trivial. There will be rebuttals that pile on the hypocrisy of such “moral offenses". There will be small things that turn into oversized, huge, colossal things, and there will be things that should never be Things. The red cups may fade into the background, but the War on Christmas will rage on for many. So there is something to be learned here, and I want my children to learn it as early as possible.

There is no universe in which I could have predicted the crazed response to Starbucks 2015 holiday cup. Personally, I like the minimalist style of the ombre cup, insomuch as I am capable of caring about a disposable coffee cup (which isn’t much, to be honest). It doesn't matter to me one way or the other what one of the most popular coffee companies has chosen to stick on the outside of their to-go cups. What matters to me sits inside, the sweet Elixir of Life waiting to be tasted, the coffee that makes being a parent (and basically being a human) possible. But the utter nonsense that followed their 2015 seasonal cup release is something I cannot fathom, both when it was announced and even now. I can’t imagine how anyone was offended. I can’t imagine how anyone could care about the opinions of those who would be offended. I can't imagine or understand how we are still arguing over this.

It'd be easy for me to jump on the bandwagon and get on my soapbox to proclaim how a coffee cup does not embody the spirit of Christmas. I understand that for many it's about so much more than a cup, but to me, it is just a cup. I could talk about the greater issues that should offend the spirit, as so many have done. I could I could wax poetic about how the minimalist style of Starbucks’ latest holiday design has nothing to do with the whitewashing of Christian faith in America. But it’s all been said. It’s all been done. There is nothing to learn here. The “faithful” will not yield to logic. The “pagans” will continue to laugh amongst themselves. There is no winning.

What I want for my children is not to land in one camp or the other. What I want for them is to move beyond such petty arguments. I don’t want them to get caught in the swirling mess that will be forgotten once everything that could possibly be said has been said. I don't want them to assume there is a Right and a Wrong. I don't want them to think their personal beliefs give them a stronger, higher, and more important moral high ground than another's. I don't want them to attack, vilify, or condemn their peers because they might not adhere to the same belief system. The Starbucks red-cup horse will be beaten past death within the week. Then what? What have we learned? What has changed?

So instead of becoming offended by something so trivial, or becoming offended by the hypocritical beliefs of others, I want my children to be still. I want them to quiet their voices when the world is in an uproar over such an insignificant molehill. Whether they grow up to be Christian or Pagan or Buddhist or Muslim or Catholic or Atheist, I want them to show their strong convictions through their actions and kindness. If they don't want to buy Starbucks coffee, then they won't. If they do, then they will. I don’t want them to shove their opinions down the throats of others. I want them to feel confident enough to go about their business, showing the world exactly where they stand without shaming others.

When it comes to how they go about their daily lives, I want them to know that a life spent focused on the things that make them angry is no life at all. Nor is it useful to spend their time pointing out the hypocrisy of others who will not listen to or care about their opinions. There are plenty of folks who are out there disproving the logic of the red cup haters, calling them out on their stupidity and small-mindedness. Mocking them. Adding to the hatred. Perhaps it’s worth noting that neither side is making the world a kinder place.

If my children someday feel like shaming the offended masses for their faux faith outrage, I would beg them to reconsider. I would remind them not to tell others to focus on the bigger picture or to consider the true spirit of Christmas. Focus on that yourself. Act on what is near and dear to your heart. Know your truth and live it. No matter where they stand on such fabricated “issues,” I hope they know that their worth should never be attached to something so small as a coffee cup.