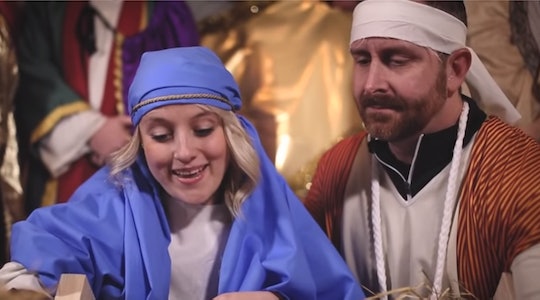 It can be tough to tell what kids really think of Christmas. I mean, most of their opinions are certainly informed by us, their parents, particularly in those early years. But the trick is finding out how much of our information filters in to their brains and how much they ignore and fill in the blanks on their own. If you're wondering how much kids understand about the whole nativity tale of Jesus and Mary and Joseph and such, please watch this video of kids explaining the Christmas story. Or their hilariously edited version at any rate.

The Southland Christian Church in Lexington, Kentucky decided to ask some kids to tell them the story of Christmas; not the whole Santa Claus and presents thing, mind you, but the original tale of Mary and Joseph walking to Bethlehem and having their baby in a barn when there was no room at the inn.

If you think you're about to watch a scripted video of sweet little children waxing poetic about the miracle of Jesus, think again. This video sees kids telling the story and the adults acting it out and lip-syncing exactly as the way the kids explain things. (No disrespect, but this reminds me a lot of Drunk History, except instead of drunk adults it's kids trying to piece together the story.)

And here we go.

The video features several children from the church's children's ministry who are being interviewed by off-camera church staff about the Christmas story. It starts out well enough... one little boy explains that Mary is out "hanging laundry" when an angel appears and tells her she's going to have a baby. I mean, not exactly the same as the original but pretty close.

The story continues as Mary and Joseph head back to "the town where Joseph used to live," also known as Bethle-ha-ha-ham, and then they met up with some wise men who wanted the baby to be their best friend and brought some gifts. Diapers, wipes, a stuffed purple hippo, gold, Frankenstein, and myrrh. You know, the usual.

Once baby Jesus was born in the barn (which was cause for concern for one kid who was worried it would be "too stinky, too crowded" for a little baby), the kids figured everyone would be pretty pumped. As one little girl summed up, she figured the wise men said, "I love you, you're the best baby I've ever seen. There. I said it."

Hanna Wahlbrink, the creative director for Southland Christian Church who created the video with a team of others, told TODAY that the video was originally produced for a Christmas Eve service in 2015 but has since gone viral. It's been viewed more than 2.8 million times on YouTube and 15 million times on Facebook. She explained that the unscripted nature of the video could be the reason it's become so popular. "We didn't ask them to say anything specific. We really wanted the kids to take the lead," she told TODAY.

There is something incredibly entertaining about a bunch of adults acting out a story based on the direction of kids. Especially when the story is as sweet and well-intentioned as the one these kids told.

Considering I've already watched it three times, I think this might become a new holiday tradition.