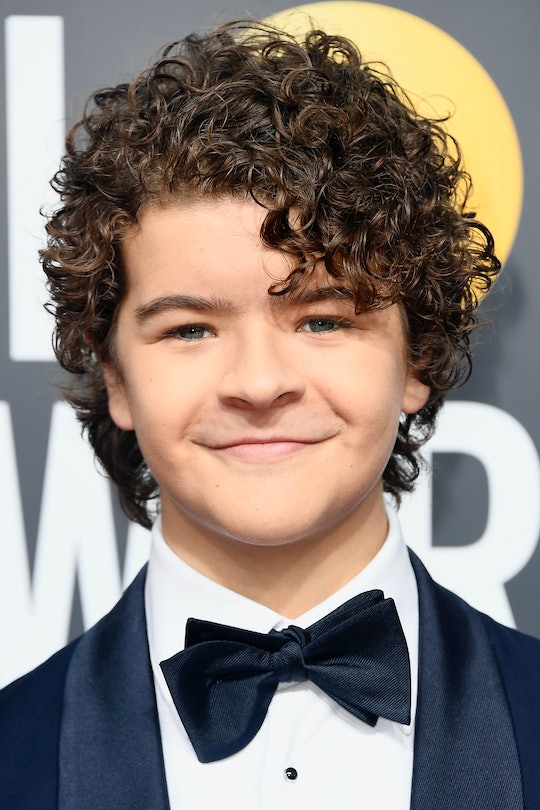 How did any of us ever manage to get through awards season without fawning over the gang from Hawkins, Indiana? Adorable and fashion forward as always, the Stranger Things cast at the 2018 Golden Globes this year did not disappoint. As they often do on red carpets, Finn Wolfhard, Gaten Matarazzo, Caleb McLaughlin, Noah Schnapp, and Sadie Sink (who plays new character Max) all showed up together, looking dapper and excited to be there as ever.

The hit Netflix show was up for just two awards at Sunday night's Golden Globes in the categories of Best Television Drama and Best Supporting Actor for David Harbour (who plays police chief Jim Hopper in the series). It's fitting, since last year they were up for almost the same awards, Best Television Drama and Best Supporting Actress for Winona Ryder, who plays Joyce Byers, the mother of Will, whose disappearance in the first season drives the entire series. The show didn't win either last year, but the cast wasn't letting that ruin their night.

Unfortunately, this year was the same, and Harbour didn't get to go up on stage to give an acceptance speech. At the Screen Actor's Guild Awards last year, his speech went viral for its message of unity as much as Ryder's hilarious facial expressions while her cast member was speaking.

In his SAG speech last year, he ended by saying that he would "punch some people in the face when they seek to destroy the meek and the disenfranchised and the marginalized," which was just the impassioned sentiment that people needed to hear after the polarizing 2016 election and the inauguration of President Donald Trump.

It's kind of a bummer that he and the cast didn't get to accept any award at the Globes this year either, or that Harbour didn't get to add his two cents to the sexual assault allegations plaguing Hollywood and all of the actors wearing black in support of #TimesUp. Speaking of which, of course, it was so great to see the young stars donning the Time's Up pins, which clearly meant a lot to fans. So I'll take it.

Although Stranger Things was a career starter for most of the cast, it also resurrected Harbour's, which makes this year's awards all the more special. He told the Los Angeles Times:

I got the Stranger Things script like a week before NBC canceled State of Affairs. I really had this moment where I’m like, ‘I’m done.’ My neuroses is very sophisticated: I was like, ‘I am done. Hollywood is done with David Harbour. They are finished.’ And then these two young dudes, these North Carolina Duffer brother dudes sent me the script and they were really interested in me.

And he was just as much a fan as the rest of us were, too. He added in the same interview:

But I was like, ‘This is a lead in Netflix, there’s no way I’m going to get it. This is amazing. There’s no way.’ And the script was so beautiful, well-written, sweet, fun and exciting. It was an indie movie and then you throw in like Jaws, a shark or something. I went in, read one scene and signed on very early.

There were a lot of great actors and TV shows competing for the same award as Harbour and the Stranger Things cast. The Crown, This Is Us, Game of Thrones, and a Handmaid's Tale were all competing for Best TV Drama, with Handmaid's Tale victorious. Harbour was up against Alfred Molina (Feud), Christian Slater (Mr. Robot), Aleksander Skarsgard (Big Little Lies), and David Thewlis (Fargo) for Best Supporting Actor, with Skarsgard taking the globe.

Although the Stranger Things cast didn't walk away with any awards this year, it definitely looked like they were still having a good time at the 2018 Golden Globes. Hey, it's just the beginning of award season, so there's still time for the gang to get some love.