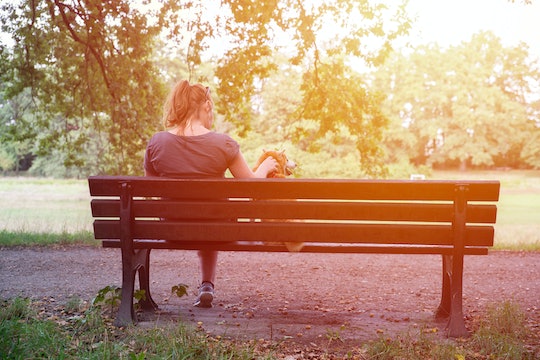 For as long as women have been having periods, people have made jokes and accusations about what happens to them during "that time of the month." Thankfully, there’s been a shift happening in the conversations surrounding periods and the women who have them. And with that, the ability to more accurately research, discuss, and diagnose the surprising things periods can tell us about mental health.

It's a bit tricky to discuss periods and mental health without falling into damaging stereotypes of how our menstrual cycles make us "crazy." The truth, as explained to Romper by Dr. Tory Dr. Eisenlohr-Moul (clinical psychologist and scientist studying how the menstrual cycle influences emotions and behaviors), is that those stereotypes are way off base: "It's pretty clear from research and experiments that have been done that most women's periods do not have an effect on their mental health at all." In other words, yes, your period can cause you discomfort and mood changes, but on the whole, your period does not negatively impact your mental health in terms of a diagnosable illness.

However, she notes, for a "large minority there are pretty significant changes" when it comes to mood (not the same thing as mental health). Those significant changes she references come in the form of medical conditions known as premenstrual dysphoric disorder (PMDD) and premenstrual exacerbation (PME). PMDD, as defined by the Office on Women's Health, is "a health problem that is similar to premenstrual syndrome (PMS) but is more serious. PMDD causes severe irritability, depression, or anxiety in the week or two before your period starts." The key word here is severe.

Eisenlohr-Moul defines it as a condition where there are "diagnosable changes in a person's ability to function in one of more life domains." This could include your role as a parent, partner, friend and/or employee. She also notes an important distinction in diagnosing PMDD is that these symptoms occur only in the week or two prior to your period and "switch off pretty quickly" in the day or two following the onset of your period. Symptoms to look out for, according to The International Association for Premenstrual Disorders (IAPMD) include the following:

PME, on the other hand, is when your period exacerbates an underlying mental condition such as depression or other mood disorders. Because the two are so closely linked, it's estimated that up to 40 percent of women who seek treatment for PMDD actually suffer from PME, as explained by the UNC School of Medicine's Center for Women's Mood Disorders' website. These conditions can be managed with proper treatment, which, as noted by the Massachusetts General Hospital Center for Women's Mental Health, doesn't always mean medication, though that is certainly the best protocol for some.

One of the challenges in diagnosing PMDD and PME is that currently there aren't any blood, urine, or saliva tests that can do so. Diagnosis, Eisenlohr-Moul explains, largely comes from "having women track symptoms across two cycles." One way she suggests doing this is by downloading a menstrual cycle and symptom app, such as the one created by IAPMD. And while she notes this is an exciting time for her work studying PMDD because there's a "huge openness" amongst grant funders to support more research on these conditions, she notes that the field is "lacking in scientists who are interested in doing the research."

To give some context to these conditions, and the need for more research and understanding surrounding treating them, she uses another medical condition. "It's estimated that 5.5 percent of the female population has diabetes. The same percent have PMDD. So, while you wouldn't say that all women have diabetes, you certainly wouldn't say it doesn't exist as well."

PMDD and PME are still relatively new diagnosable conditions when it comes to a link between periods and mental health, but they are very real and serious conditions for the women who suffer from them. If you think you may suffer from one of these conditions, Eisenlohr-Moul advises that you take a PMDD self screener prior to discussing with your doctor so that you "are going in with ammunition" and, most importantly, that you "don't waste time with a doctor who doesn't believe you."

More Like This
Should You Be Giving Your Toddler Melatonin To Help Them Sleep?
All Your Questions About Getting Pregnant After A Tummy Tuck Answered
Here's The Best Time To Remove Your C-Section Tape
How A Recall Of Contaminated Formula Made The Formula Shortage Crisis So Much Worse