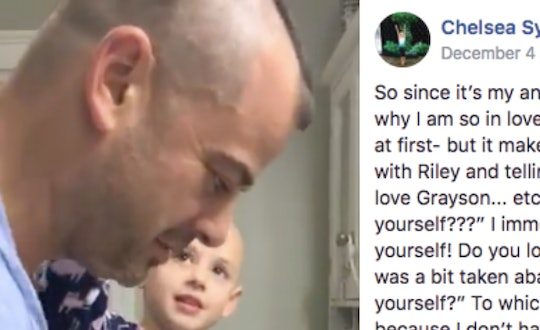 Imagine hearing your child admit that they don't love themselves. It's just about the last thing any parent on this earth wants to hear. And that's exactly what mom of four Chelsea Sylvaria heard her little girl Riley admit the other day that... she didn't love herself. She was justifiably heartbroken, until her husband stepped in and let his daughter shave his head for absolutely the best reason ever: he simply wanted his little girl to love herself.

As Sylvaria shared in a recent and now-viral Facebook post, Riley has alopecia, a rare condition which causes extreme hair loss. Her mom wrote on Facebook that Riley was recently having a rough day:

Riley's dad, Dave, came home and wanted to talk to his daughter about her feelings. And he took matters into his own hands.

Riley's dad cuddled her and asked her what was wrong. He reassured her that she was so loved and special to both him and her mother. And he also acknowledged her feelings, telling her he understood that she wanted to have hair, but that he loved her the same "no matter what" — as does everyone else she knows. And to prove to her just how little hair means, he asked her if she wanted him to shave his head.

Of course, she said yes... with just about the loveliest grin you've ever seen on her face.

The family went into the washroom to watch Riley and her dad take turns shaving his head, to prove how little a head of hair is in the grand scheme of things and to show Riley how much she means to her dad. As her dad can be heard saying in the video after his head was shaved:

I’ll keep it just like this. You know why? Because it’s just hair, kiddo. It doesn’t matter. All gone! We’ll get it nice and short just like Riley’s! Nice and bald!

It was a beautiful, thoughtful, unpretentious moment of paternal love. A moment that has since gone viral, having been viewed on Facebook more than 65,000 times and shared over 5,000 times. What's more, hundreds of people have posted messages of support and love for Riley on the video. "Riley, You are a beautiful soul...inside and out!" one Facebook user commented. "The love of your family just jumped right off this Facebook page and touched the hearts of so many people! You are one lucky little girl."

He has shaved his head before for her and every time she lights right up! It’s really special to watch. We know she will have bumps in the road with dealing with her alopecia, and that's OK! We want her to know that it's OK to get upset or mad, but we hope to encourage her to realize that she is strong and beautiful no matter what!

As she shared on Facebook, Sylvaria posted the video for two great reasons: to honor her husband on their anniversary and to help other people who might be struggling with their own self-doubt.

There is so much beauty in the things that make us different, and Riley will hopefully grow up knowing that.