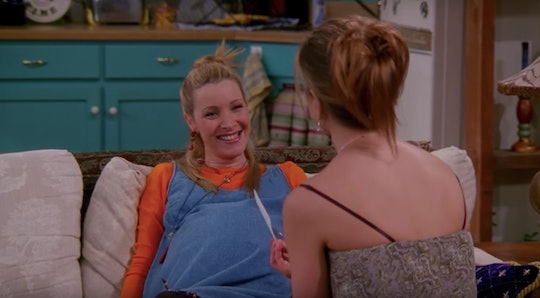 The six stars of Friends have made it clear on multiple occasions that their friendships in real life were just as close as their characters' friendships on the show. But, unbeknownst to some fans, the gang did a super sweet job of welcoming a seventh star during the fourth and fifth seasons of the series. In a new interview, Lisa Kudrow shared the thoughtful ritual the Friends cast did for her when she was pregnant during filming.

Kudrow recently sat down with People for its Celeb Parents Get Real series, where she discussed what it was like being pregnant on the set of Friends. “The six of us would do a huddle backstage and just say, ‘All right, have a good show, love you love you love you love you,’ ” Kudrow told People. “And when I was pregnant, then they would say, ‘Have a great show, love you love you — love you, little Julian!’ ‘Cause we knew it was a boy and that was his name ... So sweet, they included my little fetus in the huddle."

If you're a Friends fan, you likely know that Kudrow's real-life pregnancy was written into the show. In Season 4, her character Phoebe became a surrogate for her brother Frank and his wife Alice. However, the writers decided to make Phoebe pregnant with triplets, while Kudrow was only pregnant with one child. So, because Phoebe was carrying two more babies than Kudrow, she still had to wear a pregnancy suit on top of her real bump during filming, according to Revelist.

Additionally, the fact that Phoebe was too far along to join the gang in London for Ross and Emily's wedding worked out very well. According to a blog post on Comedy Central's website, Kudrow's doctors recommended she did not fly when the rest of the cast went to London to film the Season 4 finale, so Phoebe missed the wedding, and Kudrow filmed all of her scenes for the episode from the show's soundstage in California, and Phoebe constantly called the rest of the friends on the phone.

According to the American College of Obstetricians and Gynecologists, flying during pregnancy is generally OK — emphasis on generally:

In the absence of obstetric or medical complications, pregnant women can observe the same precautions for air travel as the general population and can fly safely.

That being said, there are many factors to take into account when flying while pregnant. In addition to the above-mentioned medical issues, there are plenty of other factors to consider. For example, how close you are to your due date, if you'd be comfortable giving birth in another city and without your regular doctor, and if you will be able to find an obstetrician.

Kudrow's son Julian is now 20 years old — and over the past 20 years, she has gained plenty of wisdom about the whole parenting thing. In March of 2017, BuzzFeed had the actress give advice to parents who anonymously sent in questions. And, unsurprisingly, her advice was both hilarious and pretty accurate. "Whenever my son cries, his dad feeds him a cookie. Now he's abusing the system and crying on command. How do I stop this madness?" one question read. Kudrow responded: "Stop giving your kid a cookie when he cries. It's so simple."

"My baby cries at all hours of the night, every night. What can I do to function like a normal human being during the day?" another question read. "You're not gonna function normally during the day because you have a baby. ...You know that, right?" Kudrow replied.

Additionally, in the interview with People, Kudrow shared a recent "proud parenting moment." She told the outlet:

I gave [Julian] advice about the internet and I [said], "That stuff’s there forever ... You’re gonna look back at this stuff and you’re gonna go, "Oh my God, I can do so much better than that now," and you might be embarrassed. And he said, "You were right."

Ah, music to every parent's ears.