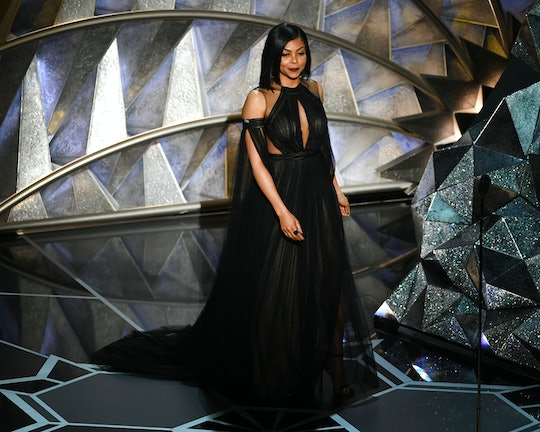 This year the Academy took steps to make sure there'd be no mix up for awards like last year's big Best Picture debacle. To prevent any confusion (presumably), the text size on the Oscar envelopes was huge and, naturally, Twitter was totally freaking out about it.

In case you've been living under a rock for the past year, the end of the 2017 Oscars took a turn after it was announced that La La Land won for Best Picture and it quickly became apparent that wasn't actually the case. Unfortunately, there was a mix up with the envelopes in which the announcers, Warren Beatty and Faye Dunaway, ended up with the envelope for Best Actress, which had already been awarded to Emma Stone for her role in La La Land.

While the confusion led to a number of now infamous memes and a good amount of hilarity, the Academy wasn't all that amused. So this year they of course took measures to make sure the "envelope ritual" — as it's called — would go off without a hitch this year. According to USA Today, that included a new procedure which would ensure the celebrity presenters confirmed they'd been given the correct envelope for the category they were to present before they hit the stage. Another way the Academy apparently made sure celebs grabbed the correct envelope was to put the name of the category on the envelope twice: once in a small font in the center, and then again in a bigger font on the edges of the envelope.

People, of course, took to Twitter to discuss the change in font size, not letting it go without notice. Most people were happy about the font size change, since although "Envelopegate," as some call the 2017 debacle, was funny many also see it as unfair to the cast and crew of both La La Land and Moonlight. For La La Land, they believed they'd won and then they had to give back the trophy because it turned out they actually hadn't and for Moonlight, they ended up having less time on the stage to say their thank you's and now they'll be more remembered for "Evenlopegate" than for the fact that they won.

So while many enjoyed the drama last year, most didn't want to see it happen again this year and are thankful that it seems the Oscars are really doing everything they can to prevent. Except they did ask Beatty and Dunaway to return and present the Best Picture award again. However, to be fair it was an honest mistake, and with envelopes this big —and with the world watching — it seemed nearly impossible for a slip up to happen again. Beatty and Dunaway definitely deserved a do-over and it's great that the Academy gave them a chance.

So tonight wasn't just a big moment for whoever actually won Best Picture, it was also a big night for Beatty and Dunaway, who got to make up for an honest mistake and present the biggest award of the night.