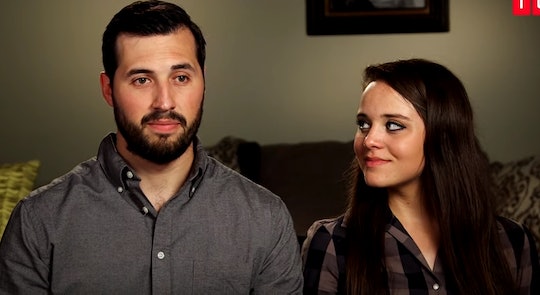 Jinger Duggar & Jeremy Vuolo: A Timeline Of Their Relationship

If ever there was a so-called rebel among the Duggar daughters, I think it's safe to say it would be Jinger Duggar. The Duggar daughter and one of the stars of TLC's Counting On has long since proven to be a trailblazer in the decidedly ultra-conservative family. I mean, the girl wears pants, instead of the floor-length skirts patriarch Jim Bob has always insisted the women in his family wear. Perhaps she's always had a rebellious nature, or perhaps it has a little something to do with her husband, Jeremy Vuolo. Let's do a little digging by looking at the timeline of Jinger and Jeremy's relationship over the past few years.

The young couple just celebrated their one-year wedding anniversary on Sunday, and it seems they are as happy as ever. Jinger shared a picture from their wedding day on Instagram as well as a sweet message for her husband:

It’s been 1 year since the day we said “I do”...it’s been the best year of my life! Jeremy, you have shown me such love that is too amazing for words. Whether we are talking, going on an adventure together, or simply doing everyday life together—I cherish every moment with you!

So how did they get where they are today? It all came down to fate... and apparently, a fortuitous family meeting.

According to Jinger and Jeremy's blog, the two were actually introduced by Jinger's sister Jessa Duggar and her husband Ben Seewald. Jeremy, a former soccer star who played for the San Antonio Scorpions, wrote:

Ben and Jeremy apparently got along, and stayed in touch via text. Meanwhile, Jessa was already thinking about Jeremy for her sister. As Jessa said in this TLC video on YouTube, it was all about Jeremy's sizzling fashion choice:

After keeping in contact with Ben for a few months, Jeremy went to Arkansas to meet the family, including Jinger, in May 2015. He wrote on the couple's blog that, while it took him a few months of getting to know the Duggars through the Seewalds, eventually he realized he was interested in Jinger.

I remember watching her testimony video that she had made with Ben and thinking, “Wow. This girl is amazing.” I called Ben and Jess and began asking them more questions about her — of course, everything they said only confirmed what I had already been seeing: a humble, meek, modest, intelligent young woman with a burning desire to sacrificially serve the Lord in any way she could.

Jeremy, who became a pastor for Grace Community Church in Laredo, Texas after leaving professional soccer, joined the Duggars on a mission trip to Central America in 2015. And Jinger told Us Weekly that was when love truly bloomed for the couple:

It was there that I really saw his heart and really admired his character. After that, he contacted my dad [Jim Bob Duggar] and asked if we could get to know each other.

Being the traditional type of man that he is, Jeremy asked Jinger's dad for permission to court his daughter in June, 2016. Jim Bob agreed, which was a good thing considering the rest of the Duggars noticed Jinger was going gaga over her new man. But perhaps Jim Bob didn't realize what he was getting into, because right out of the gate, Jeremy broke the physical contact rule right in front of him. According to Us Weekly, the two hugged on the couch, a major no-no in the world of Duggars courting. But perhaps the new couple was establishing their autonomy from the outset.

Jeremy didn't waste much time on courting; the couple got engaged by the end of July 2016. The pair released a statement to People at the time, saying:

So excited to share this news that we are now engaged. From both of us, thank you all for the countless well-wishes we’ve received during the courtship. We are so excited to take this next step in spending our lives together. We are so grateful for how the Lord has brought us together. It has been an incredible journey so far and we are excited about serving Christ together in the coming days.

Jinger and Jeremy got married on Nov. 5, 2016 in front of nearly 1,000 family and friends at the Cathedral of the Ozarks at John Brown University in Siloam Springs, Arkansas, according to People. After the two were married, they settled far from the rest of the Duggar family in Laredo, Texas, where Jinger now wears pants and sometimes sleeveless tops and heels and even shorts sometimes (all of which are strictly forbidden in the Duggar clan, but Texas gets hot so... ). Jinger is also the only one of her married sisters to make it to her first wedding anniversary without being pregnant.

Because she's doing it her way, with her husband, in a different state entirely.