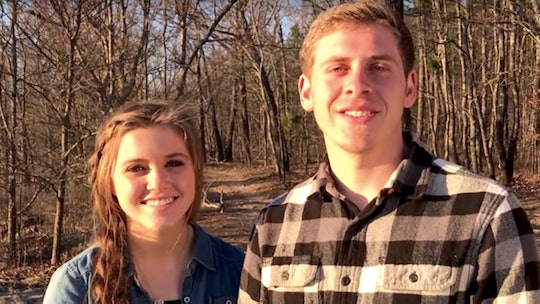 Joy-Anna Duggar & Austin Forsyth: A Timeline Of Their Love Story

Fans of TLC's now-defunct reality series 19 Kids & Counting and its popular spinoff, Counting On, can't get enough of marriages and new babies. Luckily for them, this massive family has no shortage of either, with many of the Duggar kids busy starting families of their own, all in front of the ever-present cameras. Now, Joy-Anna Duggar is the current Duggar darling to deliver on both fronts, having recently married husband Austin Forsyth just months before announcing that she is expecting. It's been quite the whirlwind for the young couple (and their fans!), with so much going on that it can be tough to keep it all straight. Enter this handy timeline of Joy-Anna Duggar and Austin Forsyth's relationship, which documents their love story as they establish their family.

If one thing's for sure about the timeline of this relationship, it's that it will continue to stretch and stretch and stretch. That's because the newlyweds are likely expecting to have more kids down the road. "We want as many [kids] as the Lord thinks we can handle and we are putting it into his hands," Duggar told People magazine shortly after their marriage in May.

So, it seems safe to say that the most notable milestones for the now 20-year-old Duggar and her new husband (as far as the public is concerned) could soon include a few more pregnancy announcements, after their first makes his or her way into the world. But, before we go looking into the future, let's look back to how it all got started.

Although Duggar and Forsyth's romance may have snuck up on some Counting On diehards, they've actually known each other for quite some time. In fact, they'd known each other for about 15 years by the time they officially became a couple, since Forsyth's family moved to Arkansas and joined the same church as the famous Duggar family.

Given the Duggars' strict rules about interactions between boys and girls (and unmarried men and women), it seems pretty safe to assume that whatever relationship they have had when they were younger never strayed into anything romantic or the physical.

When the time was right, though, Forsyth made his move to take their friendship to the next level. And when it comes to the Duggars, that means asking for the family patriarch's permission to enter into a "courtship," which is a monitored kind of dating that prohibits most physical contact. Forsyth explained his reasoning for wanting to marry her on a recent episode of Counting On:

You know, over the years, I have just been watching and I really admire her heart for the Lord and her character. She’s such a diligent worker. She gets all the younger siblings working. She's a good delegator.

Once Forsyth got the green light from Duggar's dad, he asked her to enter into a courtship with him. In the YouTube video in which the two announce they're together, posted in November 2016, Duggar admits that she was surprised by the proposal, but assures the world that she's so happy and excited to be starting this new phase of her life with Forsyth.

And it wasn't long after that until Duggar and Forsyth took that next big step toward spending the rest of their lives together: engagement. The couple announced that they had gotten engaged in early March of this year — and soon after that, found themselves facing controversy about what went down on that big day.

See, after he proposed, the newly engaged couple shared a full-on hug, but that's against Duggar courtship rules, according to AOL. Counting On cameramen captured the private moment, and Duggar later said that she had not known they were filming her at that time.

Duggar and Forsyth's wedding was originally scheduled for Oct. 28, but they unexpectedly moved it up by a full five months after just a few months of being engaged.

They ended up officially tying the know in front of 1,000 guests at their church on May 26. The nuptials aired as a two-hour special episode of Counting On this month.

In what seemed like a blink of an eye later, Duggar and Forsyth announced that they were expecting their first child together. In an excited post on their shared Instagram account on Aug. 30, Duggar shared just how much she and her new husband were looking forward to welcoming their little one into the world:

Austin and I are SO thankful to announce that we are parents!! Even before we were married we prayed that God would give us children and we are so blessed that he has given us this baby! Jesus is the giver of Life!

Congratulations to Duggar and Forsyth — fans are certainly pumped to meet the newest addition to the family.