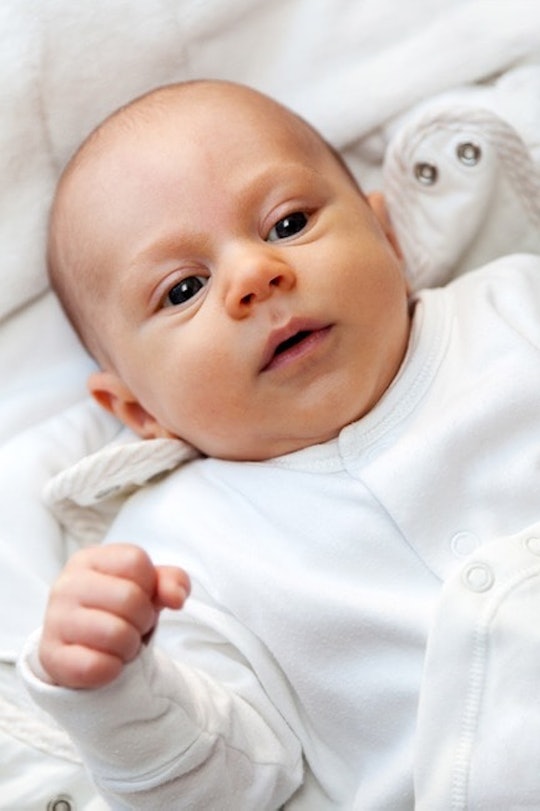 The Tiny Thing Keeping Your Baby From Sleeping Through The Night

"Sleep while you can." It's a piece of "advice" I heard a million times when I was pregnant, like there's some kind of sleep bank where I could store all of those extra hours of sleeping I clocked in while I was pregnant and I could withdraw them when my baby was born and partying all night. It's a given that babies are not known for their great sleeping skills, but the tiny thing keeping your baby from sleeping through the night is easier to fix than you think.

OK, so maybe "easier" isn't a completely accurate term. The thing is, there's nothing wrong with your baby. It's easy to assume that your baby isn't sleeping through the night because they are hungry, they are scared, they have separation anxiety, they just aren't "good sleepers", they don't like their crib — every excuse is out there. And yes, sometimes, those things do contribute to your baby's restless nights. Obviously, if your baby is waking to nurse every single night, then they are hungry and that's what's keeping them from sleeping through the night.

But if your baby just seems to wake up and not go back to sleep, there's a reason — they don't know how.

In the beginning, it's kind of expected. According to Parents, babies that are less than 6 weeks old can often get their days and nights confused, which can explain why they are up all hours of the night. But Parenting noted that by 5 or 6 months old, your baby should be sleeping six to eight hours at a time at night. Doesn't sound like a lot of sleep? According to The Baby Sleep Site, "sleeping through the night" can look different for everybody, but in medical terms, a baby that sleeps five consecutive hours is considered sleeping through the night.

So what gives? It's pretty easy. "Sleeping through the night" isn't exactly an honest phrase. As Parents noted, even adult sleepers wake throughout the night. The difference is, you know how to put yourself back to sleep. Babies have to be taught that skill.

It's a major reason why sleep associations are such a problem. If you're patting your baby every night until they pass out, when they wake up in the middle of the night, they don't know how to get back to sleep without that same pat. According to The Baby Sleep Site, the issue with sleep associations is not that your baby needs you to rock them before bed, but it's when they need you to recreate the environment they fell asleep in so that they can go back to sleep. Your baby rolling over every hour, waking up, and needing you to rock them back to sleep six times a night doesn't work well for anyone.

But you can help your baby learn to sleep throughout the night whether it's through co-sleeping or sleep training. The latter is controversial and it's not for everybody. As Kelly Mom noted, there are plenty of reasons why your baby is waking up throughout the night. They could be hungry, they may just want an extra snuggle, they could be having a developmental milestone, or they may be sick. But if your baby seems to be waking all of the time with no real rhyme or reason, it might be time to consider teaching them how to self-soothe and put themselves to sleep.