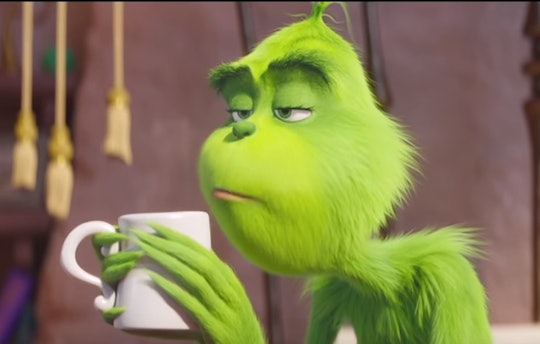 Full disclosure, I'm a fan of movies and books about the Grinch. Both the original cartoon based on the beloved Dr. Seuss story and the 2000 live-action film starring Jim Carrey in (arguably) one of his better performances are sitting prominently on my movie shelf as I type. I'm a fan of green furry beings trying to steal Christmas and then changing their minds and eating turkey legs with the Whos down in Whoville. So I was pumped to discover the trailer for the new Grinch movie. I thought it was going to be a sequel to the original, a glimpse at the life of the Grinch after he tried to steal Christmas and came to terms with his heart "which grew three sizes that day," according to literary lore.

The new trailer was released by Illumination Studios (the same people who brought you Minions and The Secret Life Of Pets) on Thursday. Benedict Cumberbatch voices the Grinch, a character first introduced to fans back in 1957 in the book How The Grinch Stole Christmas back in 1957. In the opening sequence, the song "Happy" by Pharell Williams is playing, a not-so-sly nod to the second Minions film. If you were thinking the theme of the song might be a hint that the Grinch is now, in fact, happy... think again.

It seems the song is coming out of the Grinch' alarm clock, and he's not happy about it. He starts hurling whatever he can get his hands on at his clock. Because I guess he's not happy, and I was sort of not happy that he wasn't happy. I was hoping to see him trying to tenuously hold on to his newfound positive outlook living among the perpetually exuberant Whos. I was also hoping the amazing Who sweaters featured in the 2000 version might be on display again.

I wasn't the only Grinch fan to be a little disappointed this new Illumination version wasn't a sequel.

Now that I've gotten my slight disappointment out of the way, let's talk about what seems to work in the trailer. I have always had a soft spot for Max, obviously, and he seems to be keeping up his end of the perky bargain. As the Grinch climbs out of bed, Max whips around the cave they call a home and makes his master a delicious coffee, picks out his "clothes" (a pair of green furry pants to reassure those of us who always wondered if the Grinch was walking around in the buff), and helps him get ready to visit town. Where the Grinch has only one priority; cause mayhem.

This time around, the Grinch seems to have a more subtle way of picking on the Whos; he refuses to help a woman get a jar off the top shelf at the grocery store and desecrates a jar of pickles. Christmas, that holiday most despised/beloved by the Grinch depending on where you are in the movie, gets its own back, though. An inflatable snowman knocks him on his butt in the snow.

Fans will get a chance to catch the new adaptation of The Grinch, which was directed by Yarrow Cheney of The Secret Life Of Pets, on November 9 of this year. I would imagine it will be a smashing success, no matter that it's not a sequel and yes, I know I should get over it.

But the reality is, when Thanksgiving rolls around and the warm and fuzzy feeling of Christmas starts to kick in, I'm going to be all about this movie. As is everyone else, probably.