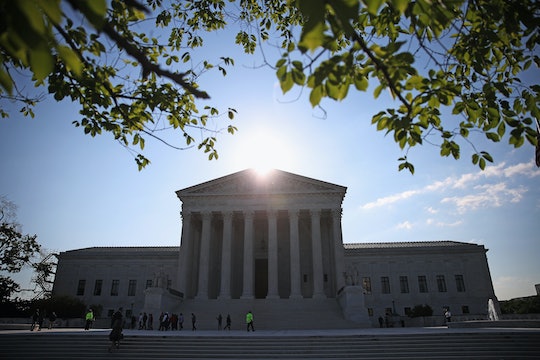 The Transgender Supreme Court Ruling You May Have Missed

A Supreme Court decision on Monday proved to be a win for LGBT rights – and it happened just one week after Attorney General Loretta Lynch's powerful speech in support of the transgender community. Although there's undoubtedly a lot of work to be done in ensuring equal rights and protection for the LGBT community, this SCOTUS decision is significant in its own right. For a little perspective, here's a breakdown of the transgender Supreme Court decision you may have missed.

The Auer v. Robbins case ruled that the courts should defer to a federal agency's interpretation of its regulations, “unless that interpretation is plainly erroneous or inconsistent with the regulation." This was the main precedent for a 4th Circuit Court of Appeals decision in April in favor of transgender teen, Gavin Grimm. The Court of Appeals relied on Auer v. Robbins to overturn a district court judge's ruling that rejected Grimm's sex discrimination claim when he was denied use of the boys' restroom at his high school in Virginia. With the dissent of only Justice Clarence Thomas, SCOTUS said it would not review the precedent, which had proven crucial in Grimm's case.

"Any reader of this Court’s opinions should think that the doctrine is on its last gasp," Justice Thomas wrote in his dissent. "Members of this Court have repeatedly called for its reconsideration in an appropriate case."

Well, Auer v. Robbins was not reconsidered in this case. The decision comes on the heels of the Obama administration's recent decree, which ensures that transgender students are protected under the government's Title IX of the Education Amendments of 1972, which prohibits discrimination in schools on the basis of sex or gender. Lynch delivered an impassioned speech last Monday, speaking to the administration's solidarity with the LGBT community.

The U.S Department of Justice and the U.S Department of Education, released a "Dear Colleague" letter to schools across the U.S that emphasized, as a condition of receiving federal funds, the importance of protections for transgender students, such as allowing them to use the bathroom matching their identified gender.

Schools have a responsibility to provide a safe and nondiscriminatory environment for all students, including transgender students. Harassment that targets a student based on gender identity, transgender status, or gender transition is harassment based on sex, and the Departments enforce Title IX accordingly.9 If sex-based harassment creates a hostile environment, the school must take prompt and effective steps to end the harassment, prevent its recurrence, and, as appropriate, remedy its effects.

The administration's support of civil rights for the transgender community continues to be important as states like North Carolina impose discriminatory transgender bills such as HB2, dubbed the "bathroom bill," which forbids transgender people from using the bathroom matching their gender identity. For now, Monday's SCOTUS move is a win, but the fight for transgender rights is only beginning.