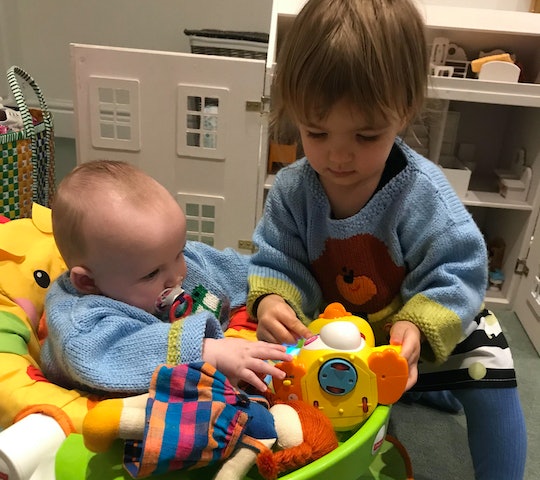 The Truth About Those First Vs. Second Baby Memes

I recently opened up a text from my sister-in-law, who also has kids only a year and a half apart in age, like my own girls. We have taken to sharing first baby versus second baby memes with one another.

On the lefthand side of this particular photo was the first baby, a precious bundle of joy laying in a bed of flowers and fur, wrapped gently inside a delicate blanket. On the righthand side of the photo was the second baby. A sticky note on its head read "4 months." The baby wore only a diaper, and rested upon a crappy old bed-sheet.

My first instinct was to laugh, as it so often is when I encounter these visual juxtapositions. I remember how attentive, if not obsessive, my husband and I were when our first was born. She quickly became the center of our universes, and we were more or less OK with that. We didn't have anyone else to care for, after all.

We changed her diaper diligently every two to three hours, never failing to apply rash cream as a precaution. We sanitized every pacifier that so much as touched the dining room table. I washed every item of clothing after one wear, even if it was completely clean. With the exception of our ventures into sleep training, I don't think we ever let her cry for more than a minute at a time before lifting her into our arms.

I cannot say the same for our second. The prime difference now is that there's a toddler in the house. A toddler who arguably demands even more attention than a 6-month-old. A toddler who, understandably, struggles in moments when she is feeling overlooked. A toddler who is more verbal and demonstrative than she has ever been, while still not having enough language to communicate all of her thoughts as and when she'd like to (leading to many a temper tantrum). As memes like this and this point out, it is impossible to give our second child the attention we gave our first, purely because there are now two of them to consider, and love, and help, and guide.

The truth is, there isn't always time to sanitize a binky these days. Diaper changes don't always end with a swab of preventative rash ointment. Photo shoots have become less about creating gorgeous backdrops or cute scenarios, and more about snapping iPhone pics when the opportunity presents itself. Clothes aren't always changed when some compote is spilled. Bedding isn't swapped every five days. Purees aren't made from scratch. Cuddles aren't always possible in precisely the moment our youngest might want one, if we happen to be contending with a toddler catastrophe.

I laugh at these memes, but then something shifts. Before I know it, I'm flooded with guilt.

There's no doubt that first baby versus second baby memes and anecdotes are entertaining because they are so often true. This is also why they are terribly sad. We can adore our second children just as fiercely and profoundly as we did our first child, but there is no escaping the fact that they cannot feasibly be the sole center of our worlds. Instead, they occupy that core space in our hearts and minds alongside the one who came before them.

Part of me believes that there might be some benefits to this as my children grow. Perhaps my youngest will be a natural sharer, because she has always had to do so. Perhaps she'll be a little more independent than her big sis, because she's always had to learn to entertain herself a little bit. I can't guarantee either, of course, but if I'm being honest, it's this sort of logic that helps ease at least some of the anxiety I feel. Anxiety that tells me I'm not as good a mother to my baby as I was to her sister.

That's the thought that plagues me the most, during the worst times. The moments when nothing is cohesive or easy. The days when there is endless crying from both children, for no reason I can comprehend. The days when there is tension between them; when my eldest cannot seemingly bare the sight of her sibling. When my arms don't feel big enough to hold them both tightly. When I want each of them to know how much they are loved, but neither seems to understand. Neither seems to find peace.

Then there are days when everything falls into place. There are days when both of my children exude such utter contentedness that I just know I'm doing a good job. These are the days that remind me that I am caring from both of my children as well as I possibly can, even if things don't look exactly the same now as they did the first time around. Even if things are messier, dirtier, and a little more worn around the edges, none of that equates to neglect.

Ultimately, I think that drive to do our best is the most important thing we can do anyway. It's not the tulle-lined dresses or baby tuxes of Baby Number 1 that make a good parent. Nor the obsessive diaper changes, "just in case." Nor the amount of new clothes versus hand-me-downs.

The best I can do by both of my daughters is simply to love them hard. That way, even if one ends up with slightly more baby pics than the other, there'll hopefully still never be a doubt in either's mind.