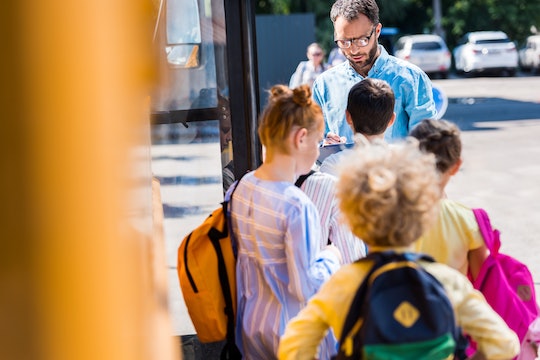 This one goes out to every lunch lady who's scraped beef stroganoff from hundreds of plastic trays. To every school janitor who's mopped up the post-football practice puke. To every petite crossing guard who has halted a barreling garbage truck with a stern flick of her white-gloved hand. And to every school nurse who has tended to the boo boos (both real and imaginary) of nervous kids who really are just in it for the Bandaids. This is a salute to the unsung heroes of our children's schools.

There is so much that goes into a child's education. As parents, we tend to put much of our focus on our kids' teachers. It's understandable, of course, as teachers helm the ship. But we often forget the dozens of behind-the-scenes roles that keep the whole ship up and running, making it possible for our kids to have a safe, clean environment to learn their common core and the capital of Sweden.

These people are often making minimum wage, and their role is generally seen as "a given." Even though the work they do so often requires superhuman levels of patience and calm. I mean, when I think of the concentration required to be a school bus driver, and to safely transport a rowdy pack of kids (each of whom has a fiercely protective parent pacing at home), well I’m not saying it’s as nerve-wracking as handling the launch codes, but I'd wager it’s close.

And yet as hard as the work already is, it isn't very hard at all to find heartwarming stories of workers going the extra mile to brighten someone's day, or help a kid out. Take crossing guard Patty Polley. ABC News recently reported on Polley, who took note of her many little charges' chilly hands, and decided to knit them all mittens! Or what about school bus driver Cindy Clausen? As per The Today Show, Clausen took the time to write all of the parents a note praising their children for showing kindness toward a student on the bus with a disability.

There's also the incredibly touching story of the late Ruth Vogt. The Week reported that Vogt manned the cash register in a school cafeteria for 20 years, and would regularly take change out of her own pocket to help cover kids' meals.

And if you're in need of an afternoon cry, might I recommend this clip from ABC News about custodian Carolyn Collins? Collins has been cleaning up after high schoolers for over a decade. But after encountering homeless students, she opened up what she called her "Giving Closet" — a small area in the school which provides struggling students with clothes, shoes, soap — whatever they need.

While these viral-worthy stories are about some truly wonderful people (and are likewise wonderful to read), I really feel like anyone who works these vital, often physically-demanding jobs deserves to be branded a mini-hero. These workers impact our lives and our children's lives in so many ways, and it's often in ways they may never even realize, or get credit for.

I remember when my son first began preschool, every morning we would walk several Brooklyn blocks hand-in-hand. He would generally be chattering about his surroundings (“Mommy look at that broken down tour bus! Mommy look at that tornado of garbage!”) while I would be half-listening, half-lost in my own head, feeling stressed and worried about my day, my week, my general life problems. But it never failed that when we hit a certain street, Tanya the crossing guard would be there. Tanya would flash us a huge smile, and try to get my very shy 3-year-old to say good morning. She called out her warm greeting day after day, week after week, but my son always hid his face from her.

But I noticed that after we passed Tanya, I would feel a bit lighter. Not because she’d safely escorted us across a hectic intersection. (Though I was grateful for that as well, and was always amused by how quickly Tanya would go from smiley chatter to no-nonsense general should a car not come to a full stop.) But what I really felt grateful for was Tanya's tiny bit of cheerleading for our day. Her joyful, positive demeanor always got me out of my own head for a moment, and made me want to smile as well, and to cross the streets ahead with the same bounding, confident strides that she did.

On my son’s very last day of preschool — the last time we saw Tanya — he did, at last, peek his head out and give her a tiny, shy wave and a smile. To which Tanya let out a whoop. “I knew I’d get you eventually, little guy!” She laughed. “I just had to keep at it!”