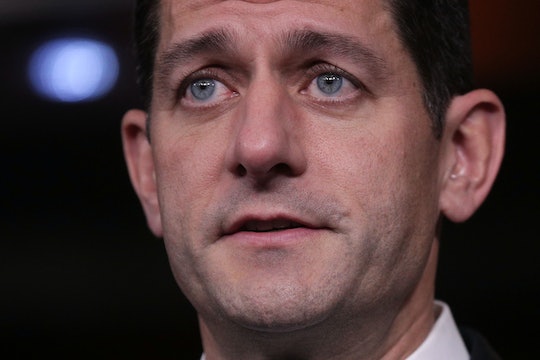 There has been a shift in the world of late, a movement. A turning of the page that was unbelievably long overdue. As millions of women rise up around the globe to finally, universally challenge the inherent culture that's allowed sexual harassment to take place for centuries, it seems the world is changing. All the way to Washington, where Congress just announced mandatory sexual harassment training. Because it's just finally time.

According to The Cut, House Speaker Paul Ryan released a statement on Tuesday announcing the new policy of mandatory sexual harassment training, saying:

Going forward, the House will adopt a policy of mandatory anti-harassment and anti-discrimination training for all Members and staff. Our goal is not only to raise awareness, but also make abundantly clear that harassment in any form has no place in this institution.

Sexual harassment and anti-discrimination training has never been mandatory in the House of Representatives, but individual offices were able to voluntarily have their staff take the training through the Office of Compliance, according to CNN. The decision to have mandatory training for all staff members of the House of Representatives comes on the heels of two recent female lawmakers — California Democrat Jackie Speier and Virginia Republican Barbara Comstock — who reportedly accused sitting members of the House of sexual harassment and misconduct, CNN reported.

Rep. Comstock said during a hearing before members of Congress that one of the alleged victims, a young female aide, was allegedly harassed by a member of the House when he exposed himself to her. She subsequently left her job, according to CNN:

She left, she found another job. But that kind of situation — what are we doing here for women right now who are dealing with somebody like that?

Sexual harassment has reportedly long been considered an "occupational hazard" when working at Capitol Hill, according to a report by The New York Times. As Rep. Speier told the publication:

The Congress of the United States should be the one work environment where people are treated with respect, where there isn’t a hostile work environment. And frankly, it’s just the opposite. It’s probably among the worst.

Stories of women being groped on the House floor, having a co-worker try to open their dress, and being told to "twirl" for a bonus are just some of the stories coming out of Congress, and representatives on both sides are calling for an end to this sort of behavior. Particularly since an open letter signed by a whopping 1,500 former Capitol Hill aides was sent to members of the House and Senate, calling for better sexual harassment policies.

As CNN reported, the letter was especially focused on the current policy of reporting cases of sexual harassment, which appears to put the victim through an overly-complicated, drawn out process:

The current policy requires victims to, among other things, spend 30 days in mandatory "counseling" before the individual can file a grievance. It is a process that experts say — intentionally or not — keeps victims from coming forward. It's not OK.

If a House aide feels as though they have been sexually harassed under the current system, they cannot report it until they undergo 30 days of counseling with a legal counselor. Then they can choose to go to a mediator, which will take at least 30 days. Then they must wait a further 30 days after mediation has ended (but not more than 90 days) to file a report.

The decision by Congress to mandate sexual harassment training for House members comes less than a week after the Senate adopted a similar policy. With Tuesday's move, it seems the world of politics is not immune to the watershed movement of women speaking out against sexual harassment — and it's about damn time.