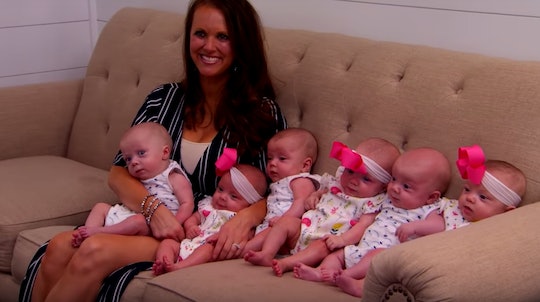 The Waldrop Family Will Celebrate Thanksgiving 2019 With 6 Adorable Toddlers

Thanksgiving is right around the corner, which means families across the country will gather around their dinner tables to give thanks and dig into their favorite holiday dishes. But for one reality TV brood, this year's feast will be especially lively. That's because the Waldrop Family's Thanksgiving table in 2019 will now have six adorable toddlers, in addition to Courtney and Eric's three older boys — Saylor, Wales, and Bridge.

Back in November 2017, Courtney Waldrop, one star behind TLC's reality series, Sweet Home Sextuplets, was waiting to give birth to her sextuplets with husband Eric. Their little ones — three boys and three girls, who are now in preschool — were born in mid-December 2017 at Huntsville Hospital in Alabama, just a few weeks after Thanksgiving. A year later, in 2018, Courtney took to Instagram to reflect on this special time. "Last Thanksgiving was celebrated in the hospital as we prepared for the arrival of our six babies," Courtney wrote in 2018. "This Thanksgiving we have all our little turkeys under our wing!!! So thankful for our many blessings on this sweet Thanksgiving Day!!!

Thanksgiving 2018 marked the family of 11's first holiday together, and this year, the stars of Sweet Home Sextuplets will surely need a little more space and food for their festive feast now that the sextuplets — Blu, Layke, Tag, Rawlings, Rayne, and Rivers — will be turning 2 years old next month.

Sweet Home Sextuplets, which premiered in September 2018, follows the Waldrops as they raise their sextuplets and adjust to life with nine children on a sheep farm in Alabama. Over the past two seasons of the show, Sweet Home Sextuplets has garnered a large fanbase, which surprised Courtney, as she told People in 2018: "It’s just like watching a home video. It’s hard to even imagine it’s on in a million people’s homes. I feel like it’s only on in our house."

So what will be on the Waldrop Family's Thanksgiving menu? Probably a lot of delicious treats! If the Waldrops follow Alabama's food traditions, then they may whip up some sausage balls — a popular holiday appetizer from the Cotton State, according to AL.com. The family's Thanksgiving table may also have slow-cooker cornbread dressing, an herb-roasted turkey, a peer salad, and sweet potato casserole. And you can't forget the classic pumpkin pecan pie, which rounds out any Southern Thanksgiving meal.

Whatever the Waldrop family serves, the food is bound to be bountiful. After all, there are 11 mouths to feed!

This article was originally published on November 20, 2018