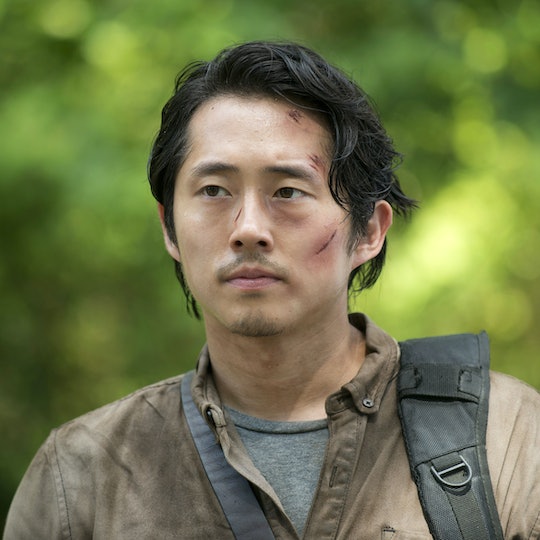 'The Walking Dead' Reveals Glenn's Fate, & It Was Exactly What Fans Needed

Last night, after four emotional weeks filled with lots of theorizing and nail biting, The Walking Dead revealed that Glenn is alive after all. Yes, fans of the pizza boy-turned-badass were finally able to breathe a sigh of relief knowing that Glenn had in fact escaped what could have been the most gruesome death in the show's history. And, after a torturous month of worry and wondering why Steven Yeun's name was missing from the opening credits, it was exactly what fans needed.

Like any good drama, The Walking Dead leaves viewers on the edge of their seats, screaming at the TV because not every plot is perfectly tied up at the end of an episode. But wondering whether or not Glenn survived the walker mosh pit was starting to hurt, as we waited week and after agonizing week for a just a hint of hope. Producers of the show didn't help the situation by sending fans cryptic messages about Glenn's fate. Luckily, after forcing fans to ride an emotional roller coaster ride of he's dead... no, he's alive... he's dead producers finally revealed early in last night's episode exactly what happened to Glenn.

The opening shot picked up right where Episode 3 left off — Nicholas shooting himself, Glenn to falling into a most pit of walkers, and guts being torn out of someone's body. Viewers quickly see that the walkers are, in fact, tearing Nicholas apart, giving Glenn a chance to slide under the dumpster and escape a similar end. After being distracted by a distant sound, the walkers trudge off, leaving Glenn free to begin his journey back to Alexandria (and, more importantly, back to Maggie and their soon-to-be baby.)

It was a short scene, yes, but that's fine. Fans didn't need to see Glenn waiting under a dumpster for an hour to be satisfied. In fact, it's better that the show quickly moved on to other issues facing the post-apocalyptic family (like, you know, the walls of Alexandria being torn down). Fans just needed to know at last whether Glenn was dead or alive, and obviously they were pretty pleased that producers chose the former.

Of course, no one was happier to see Glenn alive than Steven Yeun, who revealed on last night's episode of Talking Dead that he hasn't been out much in the last month.

"I frequent a lot of takeout, and my apartment looks like a hoarders house," he told fans in an interview. In addition the relief of being able to step outside his home again, Yeun said he is "very grateful" and "so amazed" at the response from fans over the last month. As for what Glenn's survival means to the show (other than my personal joy), Yeun gave a perfect response: "I think it proves that this world still can take that story of the good guy winning sometimes," he said. "Sometimes good guys survive."

And fans are sure as hell glad that this good guy did.