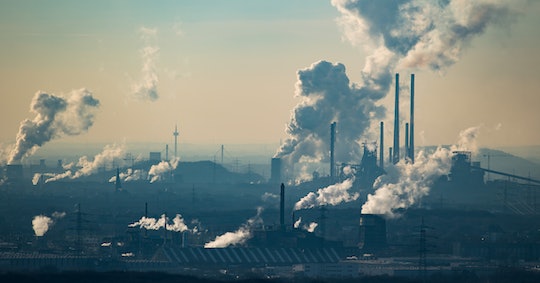 Trump Just Made His Stance On Climate Change Clear

Climate change has been a huge part of the 2016 election, especially with the newly appointed President Donald Trump not having an exact stance on the subject. But many are even more concerned as the White House Page on climate change no longer exists. As of 12:00 p.m. Eastern Time, the White House website was updated to reflect Trump and his new plans and policies. This is standard protocol, but for the climate change page to completely disappear? It's unsettling.

According to The Washington Post, Trump has claimed that "nobody's sure" if climate change is real or not. Although the president said he was open-minded to the idea of climate change, he thought that the moves President Obama made to cut carbon emissions actually did damage to America's "global competitiveness".

Science has actually proven that humans and their greenhouse gas emissions are the "dominant cause of the planet's warming trend", but Trump hasn't always been on board with science. Despite his claims to remain open-minded and to look into climate change and Obama's previous efforts, the change in the White House website doesn't seem very optimistic. In the weeks leading up to the Inauguration, the rest of the country was feeling a little more positive. CNN reported that Oklahoma Attorney General Scott Pruitt, Trump's pick to lead the Environmental Protection Agency, told the Senate Environmental and Public Works Committee that he didn't believe climate change was a hoax, but he wasn't sure if the warming trend was due to humans or just the climate's natural progress.

But seeing the climate change page completely disappear from the White House website? Where's the optimism and open-mind approach?

The page has now redirected to the White House transition page which prompts visitors to sign up for updates from President Trump and his team.

One can only hope that the page was taken down in an effort to put up a new page with information on Trump's stance and the work he is going to do towards climate change. But with his track record and belief in science, that's a big thing to hope. Trump hasn't been in office for long, but hopefully he can keep his promise to have an open mind regarding climate change, even if the White House website doesn't acknowledge it. With Rick Perry, Trump's pick to run the U.S. Energy Department changing his stance from believing climate change was a "contrived phony mess" to believing that "the climate is changing", maybe the White House just needs time to get its website in order.

Or maybe this is just a false promise Trump made to appease everyone until he could get into office. Either way, it's terrifying.