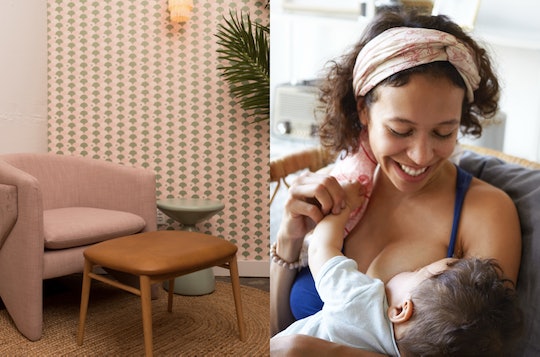 Courtesy of The Wing/ shurkin_son/ Shutterstock

These Nursing Rooms Are Exactly What Every Working Mom Deserves

It seems as though the world is finally coming around to the reality that working mothers simply have different challenges and needs from other employees. Especially when these working mothers are still trying to breastfeed their babies. They need the space to be able to either feed their baby or pump breast milk in comfort and privacy while working. Working moms have always known this, and now companies are doing something about it. The Wing is designing nursing rooms for working moms in that signature soothing style, because sometimes I guess you really do get everything you want.

Since 2016 The Wing has been offering co-working spaces exclusively for women in cities like New York City, Washington, D.C., London, England, San Francisco and Los Angeles, California (where none other than Mindy Kaling and Shonda Rhimes are founding members). The Wing has based their concept on the women's clubs that began cropping up in the 1920's' places for women to communicate and network and support each other in beautiful spaces. And now The Wing is taking their design aesthetic and female empowerment initiative to help create Mother's Rooms in outside office developments. These nursing rooms are being created in office buildings to give working moms the freedom and comfort they so richly deserve to take care of their babies.

The first company to commission The Wing's designers to create Mother's Rooms is Brooklyn-based real estate firm Two Trees Management. The company will have three respite rooms in three office buildings in Brooklyn, New York which will offer nursing moms a place to feed their babies, pump breast milk, wash bottles and nursing equipment, and change diapers if the need arises. And instead of some sad cubicle devoid of any decoration these rooms will be warm, welcoming, and best of all; private.

The federal Break Time For Working Mothers Act from 2010 means that employers all over the country are legally obligated to ensure mothers have break time for pumping breast milk in a private space for employers of 50 people or more. Of course, there is a little bit of room for interpretation here. Employers could potentially offer break times that are insufficient for new mothers and the room they offer for privacy could well be simply an empty meeting room without proper nursing facilities.

Then there's the discrimination so many breastfeeding mother struggle with in the workplace. A report from earlier this year by Pregnant At Work found thousands of women suffered detrimental effects at work because they were breastfeeding, whether that was a drop in pay or job loss.

Which is why these Mother's Rooms by The Wing are so hugely important for working mothers. They offer women-centric private spaces that will help moms relax, help them recharge, and ultimately help them find that balance between being a mother and working outside the home. Help them care for their babies while also caring for themselves. Because in 2019, this really shouldn't be an either/or situation any longer.

More Like This
If Breastfeeding Makes You Tired, Here’s How To Keep Your Energy Up
There’s A Reason Your Baby Always Falls Asleep While Breastfeeding
Can You Breastfeed After A Breast Lift? Experts Explain
Kylie Jenner Is Unbothered By A Little Breast Milk Leaking On Her T-Shirt