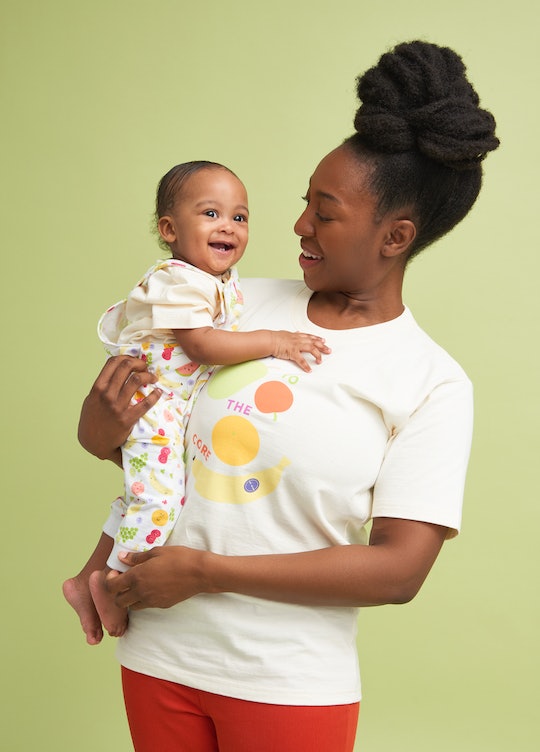 Courtesy of The Wing

You & Your Little Are Going To Love Rocking These Colorful, Fruit-Themed Clothes

There is arguably no better spot for female professionals than The Wing, the grown up girl's only club changing the way digital nomads get their jobs done. The Wing just launched a kid's clothing line to celebrate The Little Wing, their kids' space that comes complete with childcare, so you can bring your kiddo to work looking cuter than ever. Bonus? There's a matching shirt for mom, too.

The Little Wing launched in January 2019 to much applause from members of the club, who have turned to The Wing as a space for work, community, and support since 2016 according to their website. The company currently has 6 locations for members to enjoy, and five more Wing spots are set to open over the next two years. Bloomberg reported that the collective had 6,000 members and counting as of December 2018.

The Little Wing intends to serve mom-Wingers, providing babysitting services for up to two hours at a time for little ones while their moms work nearby. Only the Soho location in NYC contains a "Little Wing" right now, but the brand intends on expanding the service to all of their locations over time, starting with their West Hollywood location that is opening spring 2019 according to Mother Mag. And to get people excited about merging kid-friendly spaces and the workplace, The Wing is releasing a feminist and fruit-themed clothing line that features products for both kids and parents. Get ready for all the girl-power puns.

The big idea behind the line is "Fruit of the Womb," merging the idea of labor, as in giving birth, and the day to day labor of work. The Wing has been in the retail game for a few years now, but this is their first kids-first project, as most of their previous products have been intended for members of The Wing rather than their kids.

But they're hitting the ground running with kid clothes in the new project. The line includes color-blocked toddler socks, fruit salad overalls, the fruit pajamas featured above, "Feminist To The Core" t-shirts, and more. (The pun game is strong with this one.) The kids' tops come in a wide range, too: 12 months to 6 years.

The literal fruit of your womb would look even cuter than they usually do in this bodysuit ($26, size 6 month).

My only regret is that these happy-heeled socks ($12) don't come in grown-up sizes.

While you're shopping for your tot, make sure you grab something for yourself, too. This this is the kind of cute graphic tee that you won't be embarrassed to rock in public ($30, adult sizes XS-2XL) — not like those old shirts that you reserve just for sleeping. There's also a tote bag with the same design if that's more your style. (I personally recommend buying both; there's no such thing as too many girl-power products.)

These comfy, vibrant overalls ($35) are the kind of thing your kid will actually want to wear all day. And it's got a sweet little front kangaroo pocket where they can store their prized possessions (snacks and toys).

You can check out the entire line at The Wing's online store, along with all of their other feminist-inspired products.