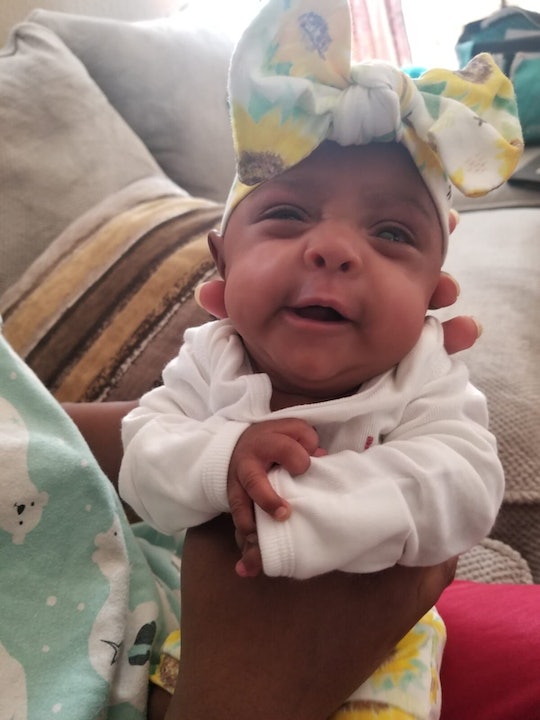 If you've been pregnant, try to remember how you felt when you were around 23 weeks along. Just past that halfway point, when you know you've got awhile to go but things are starting to happen. You're growing, the baby is growing, you're feeling more connected to the life inside you. Now imagine if that tiny, fledgling life inside you was suddenly expected to survive on its own outside your body. It seems impossible, doesn't it? Well for one little girl it happened and she's now considered the world's tiniest surviving baby, weighing just 8.6 ounces when she was born. And months later, she's ready to go home.

On Wednesday, Sharp Mary Birch Hospital for Women & Newborns in San Diego, California, shared the inspiring story of a woman who came to them at 23 weeks gestation. In a video about this incredible story shared by the hospital, the family, who understandably wants to remain anonymous, allowed the hospital to share the name nursing staff gave their daughter: "Saybie."

According the hospital, Saybie's mother was admitted to the hospital when she was 23 weeks along after experiencing "severe pregnancy complications." As NBC News reported, she was diagnosed with preeclempsia and her blood pressure was so high the doctors made the decision to deliver the baby "really quick" and she gave birth via emergency C-section at 23 weeks, 3 days gestation.

A typical pregnancy lasts around 40 weeks, according to the U.S. Centers for Disease Control and Prevention, so 23 weeks is incredibly early. Saybie's mother was justifiably worried, as was the hospital staff.

"No one expects their baby to be born with complications," Trisha Khaleghi, senior vice president and chief executive officer at Sharp Mary Birch, said in a press release. "But when the unexpected occurs, Sharp Mary Birch is equipped with the latest technologies, equipment, research and specially trained experts to care for even the world's smallest baby."

And although Sharp Mary Birch's Advanced Life Support team, along with neonatologist Dr. Paul Wozniak, were on hand to take exceptional care of little Saybie as she was transferred to the NICU, the prognosis for this severely premature baby was not good. According to a press release about Saybie from the hospital, when the baby was born weighing just 8.6 ounces — roughly as "much as a large apple" — doctors told the baby's father that she might only live an hour or so.

Little Saybie is now 5 months old and living at home.

There were certain factors that worked in Saybie's favor when she was born. According to the hospital, she was lucky enough to be born with "virtually none of the medical challenges" that frequently affect "micro-preemies" — babies born before 28 weeks gestation, also defined as "extremely preterm" — like brain bleeds, lung, or heart issues, as noted by the World Health Organization. And let's not forget her fighting spirit — a pink sign was placed by Saybie's crib that read "small but mighty."

After five months in the hospital, Saybie grew to be 5 pounds, 6 ounces and was ready to leave the hospital. And the nursing staff celebrated the milestone by putting her in a little graduation cap.

Saybie is nothing short of a miracle baby. Not only is she the smallest surviving baby in recorded history, according to the official Tiniest Babies Registry, but she also managed to beat some pretty terrifying odds. While the survival rate continues to improve for micro-preemies, it is still hovering around the 50 percent mark, according to research from the U.S. National Library of Medicine. This family is one of the lucky ones.