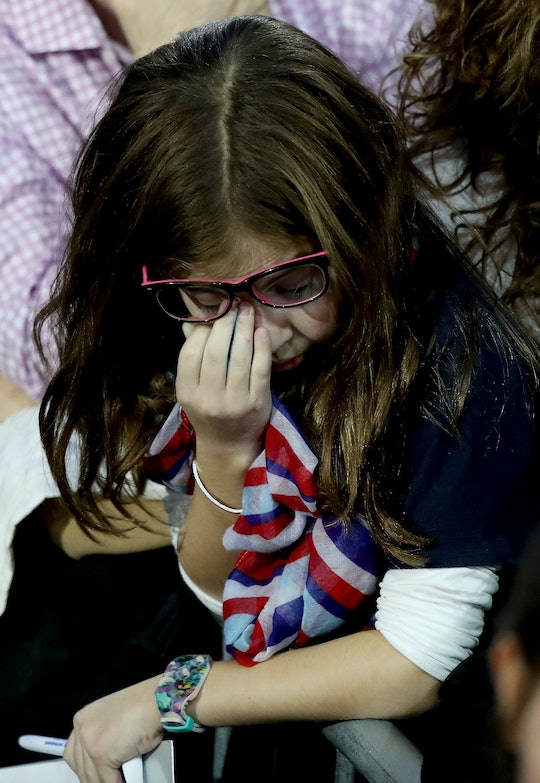 Despite not being old enough to vote and despite doing your best to shield your children from the horrors of this election season (hello, Access Hollywood tape), it's still impossible to hide everything from your kids. And while everyone has their own fears and worries about a new president, the worst part of this election is that our kids are scared.

My daughter is 2 years old. She has no idea what's going on. But today, when I cast my vote for Democratic presidential candidate Hillary Clinton and her running mate Tim Kaine, I held my daughter close so she could feel how excited I was. I was doing it for her. I was voting for a candidate who represented her best interests, who promised to do everything she could to keep my daughter safe, happy, and dreaming big.

But here's the thing. My little girl doesn't know what's happening. She's not scared because she doesn't know why she should be scared. But older children? They are terrified.

Black children are terrified that every time they see someone who believes in Trump, they're going to be called a derogatory name, that Trump is going to assume they are living in poverty, in low-income schools, no matter what their family background is. Muslim children are scared that they will be rounded up into neighborhoods to be monitored, that everyone will assume they are part of a terror group, that they will be bullied by everyone for their religion.

Disabled children are worried that if the POTUS can mock their disabilities, then anyone can. Transgender children are scared to use the bathroom.

Our children are terrified.

But our children are not adults. And all of our children are not white. And they have listened to a buffoon talk for over a year about how he's going to protect America from its own citizens. He has spun a web of racist, xenophobic, sexist, homophobic lies to scare everyone into voting for him.

But all he's done is terrified our children.

You can say all you want that Trump is never going to go through with the things he said, that his words didn't mean anything, that he chose the wrong descriptors. But to a child? A child has nothing to go on but your word. And when you promise to throw every immigrant over a wall, when you threaten to overturn Roe v. Wade, when you mock a disabled reporter or call a woman fat or ugly because she makes you mad, your words become your bond to a child.

And you have terrified a child when you are the very person that's supposed to represent her best interests.

Luckily, the more you surround your children with well-meaning, loving people, the more damage control you can provide. But in this moment, right here, as we near the end of this election, all I want to do is hug every kid who's scared. I want to promise them everything's going to be OK, but you know, I think we're all getting a little tired of promises at this point.