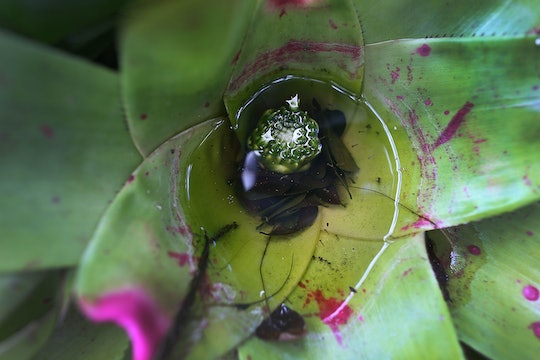 The Worst Symptoms Of Zika Might Be Hard To Pinpoint

Now that the warmer weather has finally arrived, parents are worried about several things. How to fill up the summer months with fun times for the kiddies, of course, and planning summer vacations. But this year brings a new worry for parents: how to protect your kids from the threat of the Zika virus. While most of us have heard of the Zika virus, there is still some confusion about what sort of symptoms you can expect to see from someone who has been affected. Unfortunately, the worst symptoms of Zika might often look like something else entirely.

The Zika virus is spread through the Aedes variety of mosquito. The bite of an infected Aedes mosquito passes the virus into a person's bloodstream. The Zika virus has similar symptoms to yellow fever and dengue, according to the World Health Organization, and can be difficult to diagnose. Scientists still aren't clear about the length of incubation time for the virus, although it is likely a few days .

While Zika is transmitted primarily through the Aedes mosquito, there is evidence that an infected male can pass the virus through sexual contact. Zika has been linked to microcephaly, a congenital condition where babies born from infected mothers have abnormally small brains and a host of related developmental difficulties. It was also reported in Brazil in July 2015 that the virus can cause Guillane-Barre syndrome, a degenerative disorder that causes paralysis.

So we know the possible effects of the Zika virus. We know that pregnant women and small children need to be especially careful not to contract the disease. But what do the worst symptoms look like?

Some of them include:

The woman who gave birth to the first baby born with microcephaly in the United States wasn't diagnosed with Zika until well into her pregnancy. The Honduran-born woman was pregnant and experiencing some symptoms of the virus like the telltale rash and a fever. Her doctor in Honduras told her not to worry, and even her ultrasound came back perfectly fine.

Only when the woman's grandmother (who is a microbiologist) sent a blood sample off to the Center for Disease Control, did she find out she had been infected. Her baby girl was born in a New Jersey hospital by Caesarean at 35 weeks with microcephaly.

If you are concerned that you might have been infected with the Zika virus and experience any of these symptoms, contact your local health professional. Otherwise, remember to protect yourself and your loved ones from mosquito bites this summer.