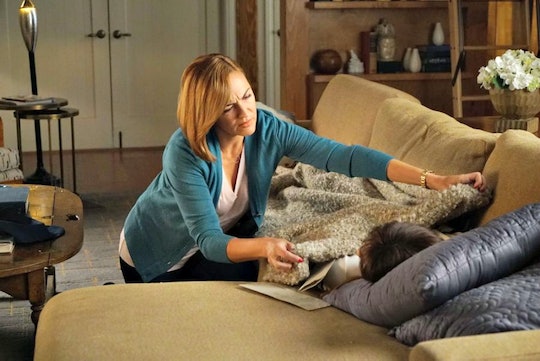 Theories About A.D.'s Identity On 'PLL' That Will Blow Your Mind

The end of Pretty Little Liars is nigh. As tragic as that may be, it also means that everyone's theories about who A.D. is on Pretty Little Liars will soon be proven true or false, which should be satisfying. The cast has promised over and over again in their press tours for the final season that the identity of A.D. will actually be revealed, unlike all those other times fans assumed we might get to know who was really at the bottom of the seven-year-long mystery.

There are tons of theories about who A.D. could be and some people even think that it could still be one of the Liars themselves. Though given that Shay Mitchell said fans would be "happy" with the ending sort of blows that away. How could the final season be a "love letter to fans" if the culprit of all this trauma, torture, and suspense was one of our beloved little Liars?

Troian Bellisario, who plays Spencer, told Refinery 29, "[Fans will be] very happy with the way the show ends... a lot of relationship goals will be achieved; a lot of mysteries will be solved." Which also means viewers might have to rule out any theories that A.D. is one of the guys. If our relationship goals (#HALEB FOREVER) are reached, then it can't be one of them either.

Then who could it be? There are still quite a few possibilities...

One Reddit user has done a lot of sleuthing and predicts that Detective Wilden is not dead at all. In Rosewood, anything is possible, right? This theory presumes that Wilden somehow helped fake his own death and funeral (there's a man in a police officer uniform behind Spencer in the scene), and has been working behind the scenes ever since.

Lucas always shows up just in time to help the Liars, but he also began the whole series sort of hating on the girls. The fact that he's made money in tech and knows about computers means he's entirely capable of all the weird things A.D. does to catch up with the girls. The idea that A.D. could be Lucas has been floating around PLL fan sites for years, with good arguments both for and against his involvement. He does love Hannah too much to torture her though, right? Right?! That board game just screams Lucas though.

We now know that Mary is Spencer's mother, so it's possible that Mary had two babies and knows that one is still missing. When Spencer confronted her mom about the truth regarding her birth, Mrs. Hastings seemed to stall for time. She filled in the blanks for Spencer, but it's likely there's a lookalike on the loose. This theory also plays into another fan favorite that this whole "Spencer with bangs" is actually her twin, taking her place. It would explain how she could infiltrate herself to always be one step ahead of the Liars in their pursuit.

This would be So. Messed. Up. For so long, Toby has been the girls' go-to, their safe space, and ally. But maybe that's just what Toby wants us to think. Remember, this all started in part because Ali had a hand in his sister's downfall. Although he and Jenna aren't close at all anymore, there could be some revenge thing he's still working on. It's hard to imagine after all of these years, but... sometimes when someone is too good to be true, they are. We know that Julian Morris, who played Wren, is coming back for the final episodes, so maybe he's just the old romantic flame that Spencer needs to help her cope. Speaking of which...

Wren's been around since the very beginning and he's always been shady AF. That fact that we know he's coming back means he could be on the good side or the bad side of the series finale. Plus, he has a Radley connection.

All of the dirtiest little secrets always seem to come back to the Hastings family. And Mrs. Hastings has never been especially kind or super concerned about her home being basically the HQ for all the late night SOS meetings. If Veronica isn't A.D., I think she definitely knows who is.

Torrey DeVitto is also returning for some of the final episodes and while maybe she was a lot shadier in the past, there's just something about her that isn't seems really suspicious. We know she was blackmailed to be the Black Swan, but maybe all of that is just a clever ruse. Maybe it really does all go back to the N.A.T. Club videos, which were always extremely creepy.

As you can see, there are tons of crazy, creepy theories about who the real A.D. is. Just please don't let it be Aria. Or Ezra, because that would be unbearable.