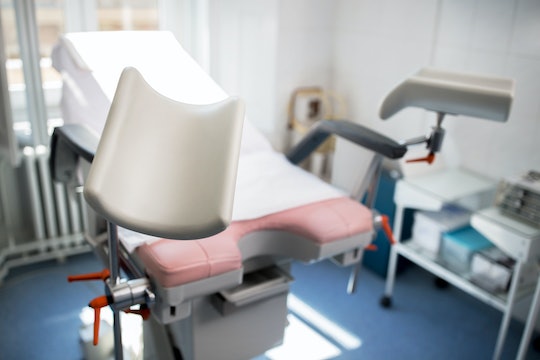 There Are Dangerous "Abortion Deserts" Across The US, New Research Finds

Red states that have passed legislation severely limiting access to abortion not only harm people seeking the procedure, but end up causing many clinics to shutter their doors. Restrictive measures, such as the Targeted Regulation of Abortion Providers — or TRAP — bills make it far more difficult for abortion care facilities to operate in those states because of new, medically unnecessary rules imposed on these practices. And those regulation have dire consequences: Clinics are forced shut down, leaving regions barren of abortion services and driving people to go to other states for care. And here are where those "abortion deserts" are in the United States, according to new research.

A new, first-of-its-kind study published Monday in The Journal of Medical Internet Research found more than two dozen cities where people seeking abortions must travel more than 100 miles one-way in order to reach a facility. These areas are known as "abortion deserts," some of which have no clinic at all, according to The Daily Beast.

In particular, researchers from Advancing New Standards in Reproductive Health (ANSIRH), a California-based reproductive health research group, did a systematic online search for clinics in the United States' largest cities — meaning they have populations of 10,000 or greater. And what they discovered is that in 27 cities located in 15 states, people have got to travel as far as 318 miles for abortion care.

What's interesting about this research, particularly, is where the concentration of these areas lie. ANSIRH researchers discovered that abortion deserts are located in every region in the United States except the Northeast. Per capita, the Midwest has the fewest number of abortion clinics — 92 facilities in 10 states — while the Northeast had the most — 233 clinics in nine states, according to the study's findings.

But which state is the worst offender? Texas. The southwestern state is home to 10 out of 27 cities that force people to travel for abortion care, the study showed. That shouldn't come as a complete shock, considering Texas is among the red states where conservative legislators roll out anti-abortion measures any chance they get, according to The Austin Chronicle.

Residents have to travel more than 200 miles for the closest facility in five of the 10 abortion deserts in Texas, according to the study. People living in Lubbock, located in northwestern, Texas have to travel 308 miles east to Fort Worth to find care, the researchers found. It should also be noted that Texas also has one of the highest maternal mortality rates in the United States; some activists say the funding cuts to Planned Parenthood in 2011 may have been one of a number of contributing factors.

This research affirms that the reality of abortion access varies widely for women depending on where they live. New technologies like telemedicine provision of medication abortion can expand access, including in areas isolated from clinics.

However, with state legislatures nationwide imposing abortion restrictions and ongoing efforts in several states to close clinics, the prospect of new ‘abortion deserts’ being created in the near future is very real.

The other states that are home to abortion deserts are: South Dakota, Wyoming, North Dakota, Arizona, Wisconsin, Missouri, Louisiana, Indiana, Utah, Kansas, Idaho, Kentucky, Alabama, and Tennessee, according to the study. Rapid City, South Dakota, topped the list: Residents there have to travel 318 miles to Billings, Montana, in order to access a clinic, the ANSIRH researchers found.

Restricting abortion to the point where people have to travel to an entirely different state for care spells nothing but disaster. People seeking abortion face financial and health risks that could be avoided if conservative lawmakers weren't so intent on "eliminating" abortion rather than taking care of people's health.