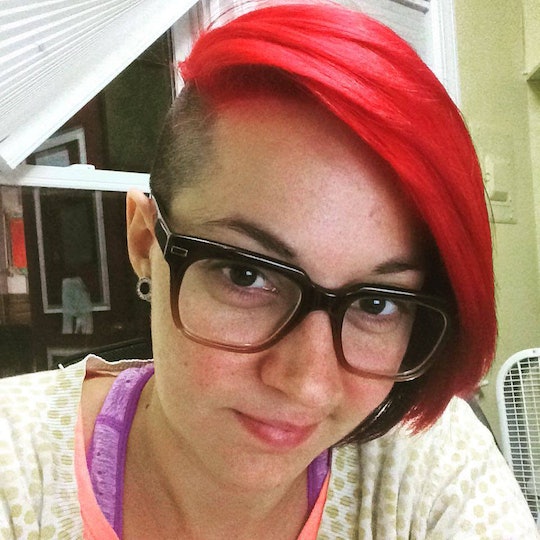 There Are No Heroes In My Rape Story, But There Should Have Been

Tom* was always invited to all the parties, always asked to be part of the group when everyone went out. To everyone else, he was fun-loving Tom. Friendly Tom. Happy-go-lucky Tom. To me, he was my rapist.

There were no heroes on the night in 2003 when I was raped inside a third floor dorm room on Northeastern University’s campus. No Swedish men burst into the room to save me, to stop the man who was digitally penetrating my unconscious body. And why would they have? The group of people who had been in the room with us when I passed out and made the decision to leave me there likely assumed I was safe. Unlike Emily Doe’s assault on Stanford’s campus, I knew my attacker: he was my boyfriend’s friend.

I am one the 75 percent of sexual assault victims who know the person who violates them, according to Rape, Abuse, and Incest National Network (RAINN). But being 18 years old and in my third week of college when I awoke in that dark room with my pants at my knees, I didn't have a word for what was happening to me. I just knew it was wrong, and I was worried my boyfriend would be mad at me for potentially hooking up with his friend.

I don’t know if they ever confronted him; I can’t remember. What I do know is that, when we all woke up the next day and the booze had worn off, nothing changed.

I pulled up my pants and ran upstairs to the floor where I lived, disoriented. I hurried down the hallway in our co-ed dorm and I told some of them what happened. To this day, the image of that hallway with the sterile eggshell walls, patterned with cinderblocks and visible paint drips, plays in my mind on a loop.

I remember that the boys were angry, I remember that they wanted to confront him, and I remember that I started to panic. What if I’m misremembering? What if he didn’t do what I’m accusing him of doing? What if it wasn’t as bad as I think it was? Their anger was simultaneously relieving and terrifying. I don’t know if they ever confronted him; I can’t remember. What I do know is that, when we all woke up the next day and the booze had worn off, nothing changed.

Everyone remained friends with Tom. I’d see him wandering the halls of our floor, those same halls I still run through in my nightmares all these years later. It was like a slap in the face to see him in my space. It meant that, even at home, I could not be safe. Even with my friends, I was not safe. Even with my boyfriend, I wasn’t safe. I stopped knowing the meaning of the word, stopped understanding what safety even felt like. He was everywhere, and so nowhere was safe.

My reality was so far from everyone else’s reality — they never said they didn't believe me, but that they didn't know what to do — that it became easy to dismiss. The less he seemed like the monster I accused him of being that night, the easier it became for everyone else to forget the night ever happened. But not me; I never forgot. I couldn’t forget, no matter how badly I wanted to.

All it would have taken for those boys to become the heroes of my story would be for them to have believed me, and to make sure Tom knew they believed me. But they didn’t.

I don’t blame them for what Tom did to me in that room that night. I don’t even blame them for what happened to my life in the years that followed — my descent into self-hatred and alcoholism as I sought to bury my pain. But I do blame them for not doing more. I want to hold them accountable for the fact that none of them ever told him that it wasn’t OK.

They may not have raped me, but they are not innocent. All it would have taken for those boys to become the heroes of my story would be for them to have believed me, and to make sure Tom knew they believed me. But they didn’t. They still called him a friend. I never pressed charges because I didn't even know that was an option; it took me years to even realize I'd been raped in that room.

This is what rape culture looks like. It looks like seeing a girl like me, who likes to drink, who likes to party, and who hops into bed with whomever she feels like and assuming that girl is "unrapeable" or that she somehow deserved what happened to her. No one ever said those words to me, but there were whispers about my promiscuity, talks about my drinking. Rape culture looks like giving the accused rapist the benefit of the doubt while interrogating the victim, assuming the accuser is the liar.

There are many ways for people to be heroes to the survivors in their lives.

And it looks like communities of people making excuses for and looking past their friends who have been accused of rape. Because rapists are not all monsters lurking in bushes, they aren’t hiding in dark corners and dimly-lit alleys, kidnapping women in parking lots, as Turner's Friend, Leslie Rasmussen, defined rape in a letter she wrote to the judge defending Turner. Rapists have friends, families, and people who associate with them. Rapists have buddies who will say things like, “Hey, she (or he) probably wanted it,” or “Give them a break, they were drinking that night.” Some people convicted of sexual assault, like Brock Turner, even have parents and judges who will make those excuses for them.

The majority of us who have experienced sexual assault will never know what it’s like to have someone save us from our nightmare, no upstanding citizen who will enter from stage left and stop the tragedy. There will be no Swedes on bicycles to call the police and hold our assailant until they arrive, like Emily Doe, the Stanford rape survivor, had. But we don’t need a savior to make what we endured a little less terrible. There are many ways for people to be heroes to the survivors in their lives. And it starts with the simplest action: believing us. Believing survivors is a heroic act. Even more heroic? Holding your friends and community members accountable when someone tells you they’ve been the perpetrator of violence.

We also need more everyday heroes, too: people who believe us when we disclose our stories and are willing to take our side against our assailants. We need justice and support in ways that have nothing to do with the justice system, because for many survivors, the justice system isn't available to us, nor do we necessarily view it as a valid method of recourse.

Heroism looks like telling the accused that you're aware of the accusations. It means demanding that they answer to the claims against them and dismissing any semblance of an excuse that "everyone was drinking and things got a little out of control." It means withholding your friendship to show them that your loyalty lies with the woman claiming assault, because it is extremely rare that women lie about sexual assault, but all too common that they are not believed. With a justice system that lets survivors down and with 97 percent of rapists never seeing the inside of a jail cell, we need our community to step up and choose us, to say, "I believe you," and to say to those accused of rape, "I am aware of the accusations against you, and I take them very seriously." Until that happens, people who rape and commit sexual assault will continue to rape and commit sexual assault because their lives are not negatively affected by the violence they perpetrate.

If someone had believed me and stood by me when I told them I had been raped, there’s no guarantee that I would have had an easier time coping with my trauma. But I may have blamed myself less, and I might have thought that I was someone who was worth something. This is something that Emily Doe believes, too — in her letter, she thanks more people than just the men who saved her that night. She thanks all of the people who helped her through this incident, because she recognizes that there is more than one way to be a hero to someone.

So yes, we need more people like Emily Doe’s heroes who saw that something was wrong and did something about it. But we also need more everyday heroes, too: people who believe us when we disclose our stories and are willing to take our side against our assailants. We need justice and support in ways that have nothing to do with the justice system, because for many survivors, the justice system isn't available to us, nor do we necessarily view it as a valid avenue of recourse.

Because, I hate to break it to you, but if you are not holding your friends accountable when they commit sexual violence, you are condoning it. You are part of the problem. Wouldn't you rather be part of the solution?

*Name has been changed.