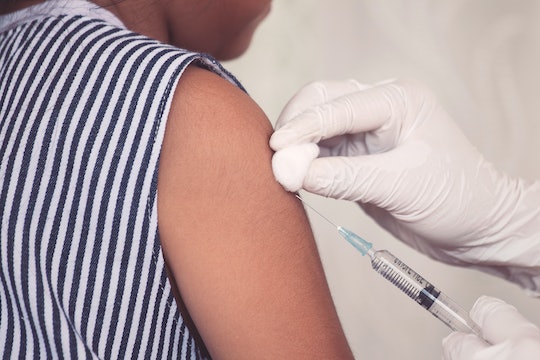 There Could Be A Vaccine For Peanut Allergies Soon, So Here's What Parents Should Know

At least 1 in 13 children in the United States who live with one or multiple food allergies. That's as many as 6 million kids who have to change their diets or avoid situations entirely in order to prevent a potentially life-threatening allergic reaction. And one of the main culprits of those allergies: peanuts. But, as new research has shown, there could be a vaccine for peanut allergies on the horizon, opening up a whole new world for peanut allergy sufferers.

A new animal study published this week in the Journal of Allergy and Clinical Immunology found that a nasal vaccine may be able to minimize or prevent allergic reactions from peanuts, according to Yahoo! News. In particular, University of Michigan researchers, who spent nearly two decades developing a vaccine agent, gave allergic mice three monthly doses of a nasal vaccine, and discovered that the experimental drug can redirect how immune cells responded to peanuts in said mice, Yahoo! News reported.

Although this was an animal study, the results still show some promise when it comes to developing an allergy vaccine for human sufferers. And when it comes to peanuts, it can't come to soon: Peanuts are one of the top 10 foods that cause 90 percent of all allergic reactions in young people, according to KidsHealth. And many of these allergies may be severe, and could lead to life-threatening anaphylactic shock.

We're changing the way the immune cells respond upon exposure to allergens. Importantly, we can do this after allergy is established, which provides for potential therapy of allergies in humans.

Konek added, according to the release:

Right now, the only FDA-approved way to address food allergy is to avoid the food or suppress allergic reactions after they have already started. Our goal is to use immunotherapy to change the immune system’s response by developing a therapeutic vaccine for food allergies.

This isn't the first time scientists have identified a promising treatment for peanut allergies, though. Research from Aimmune Therapeutics, a California-based immunotherapy company, found that 67 percent of kids with serious peanut allergies who were exposed to peanut flour over the course of six months were able to tolerate "the equivalent of two peanuts" by the end of the trial, according to ABC News. The study, presented at an allergy conference last month, involved nearly 500 severely allergic children between 4 and 17 years old who were either given peanut flour capsules or a placebo in increasing amounts for half a year.

It should be noted that exposure therapy should not be tried at home, as it's "potentially dangerous" and needs to be done "in a very safe setting," lead researcher Dr. Stacie Jones, a University of Arkansas allergy specialist who consults for Aimmune Therapeutics, told ABC News. But doctors do find the results encouraging, although more research is needed into what happens when treatment is discontinued.

Dr. Stacy Dorris of Vanderbilt University had no role in the study, but told ABC News:

It's exciting. This is a way to potentially protect people who are allergic from having a severe or even fatal reaction.

As someone who suffers from a peanut allergy, I can't help but be hopeful that one day I will be able to stuff my face once again with Reese's peanut butter cups. But this breakthrough study has implications beyond potentially introducing or reuniting allergy sufferers with the sweet, sweet taste of legumes. It's also giving scientists insight into how food allergies work more broadly, and the tweaks needed to treat them move effectively.

As senior study author James Baker, director of the University of Michigan's food allergy center, said in the news release:

Food allergy has exploded in prevalence and incidence, but we still know so little about it because there hasn’t been that much research in the field. This research is also teaching us more about how food allergies develop and the science behind what needs to change in the immune system to treat them.