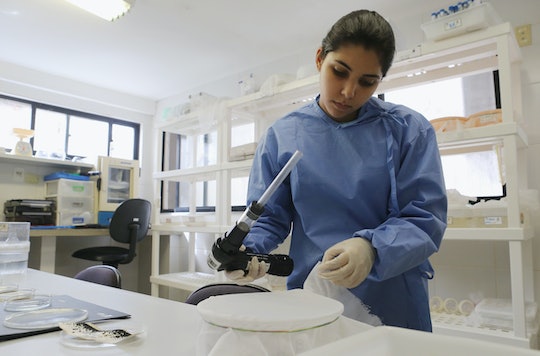 There May Be A Way To Stop The Zika Virus, Thanks To Mutant Mosquitoes

Let’s hear it for science! In response to the widespread concern over the mosquito-borne Zika virus, British biotechnology company Oxitech has developed a genetically modified mosquito that could help stop Zika by limiting the spread of the virus by stopping Zika mosquitoes from producing viable offspring, according to NPR. The mutant male mosquitoes are bred in a lab to pass on genetic information when mating that keeps hatched mosquito larvae from surviving into adulthood.

This is a big deal, as it means that countries struggling to contain the Zika virus, like Brazil, can control the population of Aedes aegypti mosquitoes, the aggressive breed that has led to the rapid spread of the virus. According to CNN, tests in Brazil, Panama and the Cayman Islands showed a 90 percent reduction in the virus-carrying mosquito population, a huge step forward for limiting the effects of not only Zika, but other mosquito-borne viruses, like dengue and chikungunya.

While the Zika virus doesn’t seem particularly dangerous to the majority of the population — according to The Independent, “the most common symptoms of infection are fever, rash, joint pain and red, itchy eyes” — it’s a different story for pregnant women. The virus has been linked to a birth defect called microcephaly, which causes babies born to infected women to have abnormally small heads, leading to “severe developmental issues” and sometimes death, according to CNN. The Zika virus has also been linked to Guillain-Barre syndrome, “a rare autoimmune disorder that can lead to life-threatening paralysis.” According to WBUR, more than 3,800 babies have been born in Brazil with microcephaly since November, compared to only 146 in 2014.

Although concerns are high that the Zika virus will spread quickly and dramatically throughout the U.S., it will still be a while before Oxitech’s GMO mosquitoes could be used in any parts of the country. According to The Independent, Beth Ranson, a spokeswoman for the Florida Keys Mosquito Control District, said that before the Oxitech mosquitoes could be used there, the Food and Drug Administration would have to complete an environmental assessment, with its findings then becoming available for public comment. A local board would then have to approve it, a process which, all in all, is not easy to expedite.

And a Zika vaccine isn’t likely to be available any time soon, either. According to the Daily Mail, American researchers have two potential Zika vaccines ready for clinical trial, but the process can take years.

The spread of the Zika virus has health officials all over the world extremely concerned — women in El Salvador, for instance, have been urged to delay pregnancy until 2018 to avoid Zika-related complications, and the U.S. is recommending that pregnant women avoid traveling to countries currently experiencing outbreaks, according to CNN. So far, U.S. cases have been limited, thanks, in part, to already-existing mosquito control measures, according to NPR. But the usual advice for limiting personal mosquito exposure still makes good sense: use a repellent spray, cover up as much as possible to avoid exposed skin, and be sure to empty any standing water that could become a prime mosquito breeding ground.

(But seriously, mutant mosquitoes might save the world. That’s almost as cool as Mark Zuckerberg’s AI robot butler.)