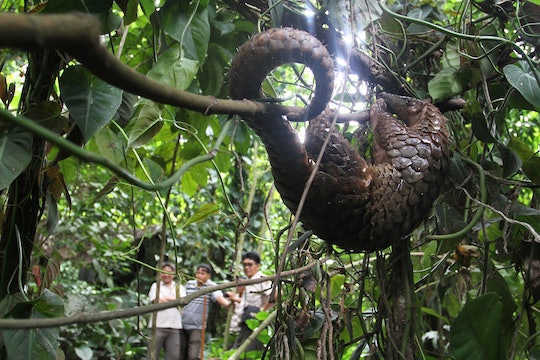 There's A Pangolin In 'The Jungle Book,' And Everyone Is Freaking Out

The star-studded cast of the lifelike Disney remake of Rudyard Kipling’s The Jungle Book is absolutely stellar. Since its release on Friday the movie has been receiving amazing reviews, applauding the reinvention of the classic. Sure, Scarlett Johansson, Bill Murray, and Idris Elba have everyone beyond excited to see these beloved cartoon characters come to life, but the cameo of a strange scaly anteater-looking creature is really what’s getting all the attention — There’s a pangolin in The Jungle Book and yes, everyone is freaking out.

So, what is a pangolin?

The pinecone-sloth-anteater hybrid creature in The Jungle Book is found in Asia and sub-Saharan Africa. They mammals are the size of a house cat and are covered in scales. They have long sticky tongues for slurping up ants and termites and they can quickly roll themselves up into a tight balls, like a ladybug, when they feel threatened.

Often referred to as “scaly anteaters,” they are actually one of the most endangered groups of mammals in the world, poached for their meat and scales.

National Geographic reported that tens of thousands of pangolins are believed to be poached annually, which doesn’t help their endangered status — females only reproduce once a year. CNN’s John D. Sutter wrote an in-depth report titled “The Most Trafficked Animal You’ve Never Heard Of” in 2014. Sutter reported that the scales are used for medicine and the meat is considered a delicacy in China, some believing their blood has healing powers.

The pangolin’s performance in The Jungle Book has the Internet hyped, hopefully getting the endangered creature some much-needed awareness.

The U.S. Fish and Wildlife Service announced last month that it will consider giving greater protection to pangolins, which would make it illegal for people to import the animals or their parts into the U.S. Pangolins are in trouble, but are getting closer to protection, at least in the states.

Sarah Uhlemann, international program director at the Center for Biological Diversity, told National Geographic activists are serious about cutting of the market for pangolin goods. She added that the species deserves protection because “there’s the potential that pangolins could go extinct before people even know what they are.”

Perhaps the pangolin’s appearance in the box-office hit will be the push into the spotlight they needed. Social media surely is paying attention. And if you didn’t know of the pest-control creature before, The Jungle Book has definitely helped get people talking, hopefully getting the attention pangolins desperately need to survive.