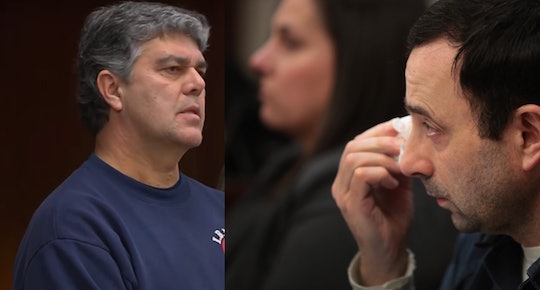 It's every parent's nightmare, finding out your child has been abused by someone you thought you could trust. And it's a nightmare the parents of hundreds of Larry Nassar's victims are living through right at this moment. Knowing your child was harmed, was frightened, was victimized on this level... it's unspeakable. When one father simply couldn't handle the horror for a minute longer, other parents quietly understood his pain. And now, there's a fundraiser for the dad who attacked Larry Nassar in court.

Randall Margraves, a father of three daughters who were assaulted by Nassar, lunged for the disgraced doctor after listening to his daughters' impact statements in court on Friday. After becoming "distraught" hearing his daughters' tell the court about how Nassar's sexual abuse had affected them, CNN reports that Margraves asked Eaton County, Michigan Judge Janice Cunningham:

I would ask you, as part of the sentencing, to grant me five minutes in a locked room with this demon. Would you give me one minute?

When the judge responded that she couldn't do that, because that's simply not how the legal system works, Margraves muttered, "Well, I'm going to have to," and lunged for Nassar (who hid under a desk looking terrified).

Margraves was detained by officers of the court, even as he continued to say while handcuffed on the ground, "I want that son of a b**ch." He asked the officers what they would do if this happened to them as Michigan Assistant Attorney General Angela Povilaitis reprimanded him:

He was removed from court, and has since admitted to the court that he lost control because he hadn't known what his daughters would say... and because Nassar was shaking his head during his youngest daughter's victim impact statement as though denying her story.

I lost control. I apologize a hundred times. I'm definitely calmed down. I'm embarrassed. I'm not here to upstage my daughters. I'm here to help them heal.

The judge accepted his apology while noting that violent behavior is simply not the answer:

We cannot and I cannot tolerate or condone vigilantism or any other type of action that basically comes down to an eye for an eye, a tooth for a tooth. That's not what's best in this situation. What's best here is that we take this horrible tragedy and we learn to educate people.

In the wake of Margraves frustrated attempt to attack Nassar, social media has since branded him something of a folk here. So much so that a Go Fund Me page was initially set up for Margraves by his friend Aaron Pangborn as a way to help him out if he had to pay any legal fees. While Margraves was released without penalty, it didn't stop people from donating quickly; although the page was set with a goal of just $1,000, within one day more than $30,000 had been donated by people who understood this dad's motivation. Donations have since been closed, and Pangborn wrote on the Go Fund Me page:

Wow, thank you all for your support.I initially started this gofundme campaign as way to help cover any legal and court costs that Randy may have after this mornings news.As we all know, Randy was not charged after the fact.I will work with him and his family to ensure the funds collected will go to a good cause to help victims of sexual abuse.

Violence is obviously never the answer. But I think there are few parents out there who would fail to understand the frustrated, impotent rage Margraves must have felt listening to his daughters in court.

While there is nothing positive to be said about the horrific case of Dr. Larry Nassar, hopefully the money raised will make a difference in the lives of victims.