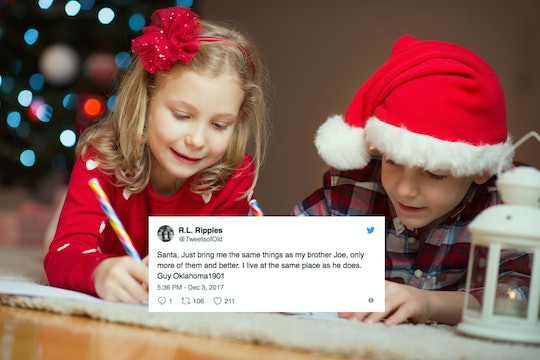 There is a whole lot of cynicism in the world in 2017. It's easy enough to check your news feed and think that there's nothing pure or beautiful or good about the world we live in now. That despair at the plight of the world is, sadly, not unique to this generation, nor is cynicism a new concept. But there is something else that remains relatively unchanged; kids. If you want proof that the heart of a child remains essentially unchanged throughout time, check out these letters to Santa from a century ago. They're a potent, timely reminder that kids always want the same basic things. Toys (of course), love, magic... and in many cases, forgiveness.

The Twitter feed R.L. Ripples is committed to sharing "tweets of old" for one purpose:

We attempt to reveal the lives of our predecessors through the tweets of yesteryear: Real one-line brevities from old newspapers, as they appeared--or close.

It's a lovely concept, and the recent spate of letters to Santa published in newspapers as far back as the late 1800's really does feel like a deep connection to the past. Because the tweeted letters run the full emotional gamut; funny, sad, sweet, and slightly naughty. And I would be surprised if you didn't recognize your own kids in some of these letters (not to mention yourself as a child).

It's always great when kids remember their brothers and sisters in their letters to Santa. Of course, sometimes their intentions are great. They want to make sure their siblings get Christmas presents, especially the ones who aren't old enough to write their own letter. Other times... well. Nobody's perfect.

Kids Who Copped To Their *Crimes*

Kids have always struggled to keep their behavior in check all year. And then Christmas comes around, and it's like Uh oh, time to pay the piper. These kids have it figured out; cop to your crime up front and hope that Santa will throw a little mercy your way. What else is there to do?

Kids Then Were Free Of Gendered Tropes

Now here is something reassuring for children who aren't interested in gender stereotypes; over 100 years ago, there were plenty of kids out there who simply wanted to play with whatever toys interested them. Regardless of the whole "boys play with trucks, girls play with dolls" tired trope.

Adrien, a little girl who appears to not only have decided what her future will look like but welcomes it with open arms, deserves a section all on her own.

Not every child who writes to Santa has something they would like from the jolly man in red (for modern-day evidence, do yourself a favor and read this 6-year-old skeptic's letter to Santa). Some kids were clear as a bell about what they didn't want for Christmas... in one case, if he could just stay away from the house altogether that was preferable.

How do you explain to kids why Santa visits some and not others? Why he can't help a sick parent or a broken home? It's the dark, heartbreaking side of the holidays, the part each parent struggles with in their own way. In modern times, there are a myriad of ways to help, like adopting a child's letter to Santa through Operation Santa. A century ago, however; these children somehow managed to keep believing, even when it must have been terribly difficult to do so. And their worry over the people they loved... there is nothing better than the heart of a child.

As 2017 draws to a close, it's easy enough to focus on all of the troubling developments in our world. But perhaps everyone can take comfort in this; kids come into this world wanting nothing more than love, friendship... and about $100 worth of peanuts every once in a while.