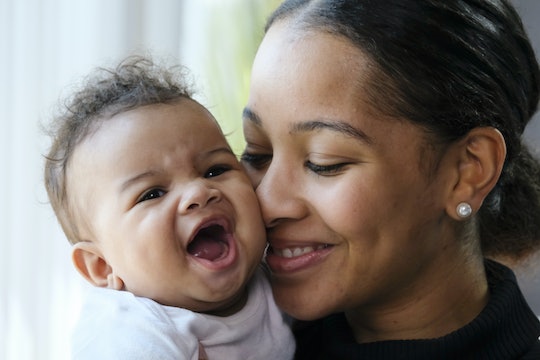 It's one of those conversations so many moms have had over the years: Do I have children in my 20s or wait until I'm in my 30s? I had my kids in my 20s, like all the way throughout my 20s, and I'm glad I did, of course. We've always had a good time together, but I'm not going to lie to you; in so many ways, I feel like I basically grew up with my kids. And I wonder what might have been different if I had waited until I was in my 30s to have kids? What are the benefits of having kids in your 30s?

More Like This
Vaccinated People Can Ditch Masks. Where Does That Leave Kids?
Here's The Deal With Babies Who Sleep With Their Eyes Half Open
30 Vintage Photos Of Parents Giving Their Babies A Bottle
Is The Tooth Fairy Real?

Every decade has its pros and cons when it comes to starting a family, of course. People in their 20s tend to be at their physical peak (although I will happily admit, my 20s were dedicated to Cool Ranch Doritos, so I was definitely not at my physical peak), which can make the physical aspect of having a baby easier. Also, there's the possibility that mothers in their 20s could have more energy to deal with squalling toddlers and temper tantrums.

I can personally attest to one benefit of having kids in my 20s — my 40s are honestly so much easier than any of my friends, I'm not going to lie. But still; waiting to have kids in your 30s has some pretty serious benefits that should not be overlooked if these studies are to be believed.

This is one perk to having kids in your 30s that really should not be overlooked. If you've been in the work force for a decade, especially without kids, you might have a little more money in your pocket. And hopefully more clout in the workplace to allow you to take time away. Elizabeth Gregory, author of Ready: Why Women Are Embracing The New Later Motherhood, compiled data from the U.S. Census Bureau and found that mothers who waited until their 30s to have children enjoyed significantly higher salaries than those who gave birth in their 20s. On average, Business Insider reported moms earned around $50,000 more per year when they waited to give birth until their mid-30s. Which is obviously hugely significant.

Having Your Emotional Sh*t Together

A study published in Psychology Today called "The Relationship Between Maternal Education and Children’s Academic Outcomes" found that parents in their 30s who were college educated were better equipped in several crucial ways to care for their kids. Because they were older, and ostensibly able to stay in school longer, they were able to support their child's education by improving their cognition skills and engaging them with interactive vocabulary. Further, the study found that these parents were likely to have friends and family who had benefited from higher education and were able to act as positive mentors, according to Psychology Today.

You're Going To Live Forever

Good news for you, bad for me; a study published in The Journal of Public Health found that women who waited until their 30s to have their first child live longer. Lead author Aida Isabel Tavares of the University of Coimbra told Global News in August:

Not only are you going to live longer, you're going to be smarter while doing it. Researchers at the University of Southern California found that later pregnancies helped with better brain power after menopause.

The study, published in The Journal of the American Geriatric Society found evidence to support the idea that “a positive association between later age at last pregnancy and late-life cognition." That same study also found a link between using hormonal contraceptives like the birth control pill and increased long-term brain function.

Your Kids Will Be Smarties, Too

A study published in Population and Development Review found that children who were born to parents in their 30s score higher on standardized testing and tend to stay in school longer. These children also had stronger communication skills and enjoyed much more extensive vocabulary.

In other words, waiting until your 30s might not be the worst idea in the world. If this research is to be believed, then you'll live a long, wealthy, super smart life.