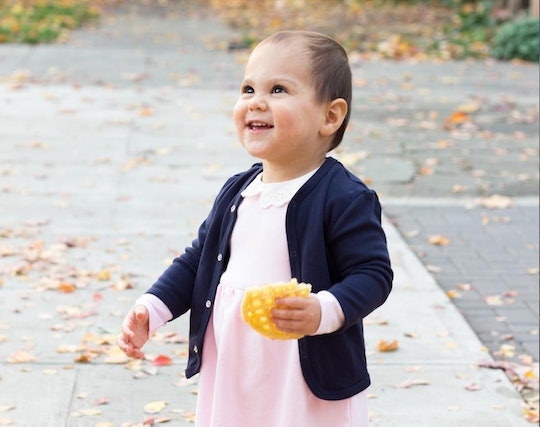 Every single year, I'm astounded by how into Halloween people get. I'm always the person who's scrambling to decide on a last-minute costume on the eve of Halloweekend. Others, though, have it down pat. They prepare elaborate costumes weeks in advance and, come the day of, they're rocking perfectly executed, hilarious, cute, or downright terrifying looks. With the recent release of the second season of Stranger Things, of course the fandom used Halloween as an opportunity to honor their beloved Netflix thriller. Luckily for us, this means that Halloween was full of adorable babies dressed as Stranger Things' Eleven, the Eggo-loving, nosebleed-having telekinetic.

Having a baby makes the holiday even more chaotic; parents have to be the mastermind behind and personal shopper for a whole other person's costume. Somehow though, parents across the country managed to not only pull it together to dress their kiddo up for the holiday, but they knock it out of the park — their creativity and ability is amazing. Although these miniature Elevens are far less mysterious than Millie Bobby Brown's character on the show, they still pull off the short hair and jumper just as well as she does, arguably better even.

Eleven's plot line in season two may have been controversial, but there is nothing up for debate about how cute these nine babies dressed as Stranger Things' Eleven are.

More Like This
18 Holiday Gift Ideas Perfect For Your In-Laws
20 Secret Santa Gifts Under $5 That Won’t Disappoint
How Does Elf On The Shelf Work? A Simple Guide For Parents
How To Introduce Elf On The Shelf To Your Kids For The First Time