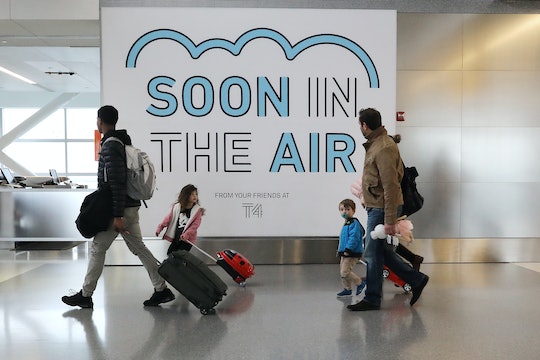 Do you know what's so much fun? Flying with a hungry baby. Honestly, it's like, don't even bother inviting me to a party because this is about as good as it gets. When they get really fussy and they want to feed, but you're sweaty and cramped in your undersized airplane seat and trying to soothe your baby, but it feels impossible. Good times. Although do you know what might be slightly better? Being able to feed your baby in comfort before you get on the plane. Which is one of the reasons these airports have added breastfeeding pods; because perhaps it's nicer for moms and babies to have a clean, quiet space to feed, to pump, and to generally recharge while traveling.

Also it's the actual law now.

As of 2018, all medium and large airports are required to add lactation rooms for breastfeeding mothers in every terminal of the airport, INSIDER reported. This is based on the Friendly Airports for Mothers Act (FAM), which required all airports have such rooms. Now up until that point, many airports didn't have enough space to accommodate all the travelers who needed this sort of room. Which left moms with few options. Take the four major airports out of New York, for instance. One lactation room in each airport would clearly not be enough. Which is perhaps why they have just purchased 28 Mamava lactation suites.

Port Authority has purchased 28 of the larger Mamava lactation suites from the Burlington, VT-based company for their four airports; Newark Liberty, John F. Kennedy, LaGuardia, and New York Stewart airports, according to a press release. While Newark Liberty and LaGuardia airports already had some of the smaller versions, the larger versions were ordered based on travelers' requests, as per New York's NBC affiliate.

These clever pods will offer mothers the privacy they need to breastfeed in comfort while at the airport, and other airports are expected to follow suit in the near future in compliance with the Friendly Airports for Mothers Act. As Port Authority chairman Kevin O'Toole explained in a press release to Romper:

With the Port Authority in the midst of comprehensive airport redevelopment, any amenity that makes the travel experience better for nursing mothers is an important component of that modernization. We recognize the needs of our travelers and are committed to providing them accessible, sanitary and convenient nursing suites.

Now if you're wondering where these wonderful new suites are located, there's an easy way to find out. Mamava has an app that tells breastfeeding or pumping moms where they can find a lactation suite close by to get a little privacy and comfort. As it stands right now there are 12 freestanding suites at JFK, nine at Newark Liberty, six at LaGuardia Airport, and one at New York Stewart International Airport, as per the Port Authority press release.

It's such a simple, human thing, being able to feed your baby in comfort. And while it's hard to believe it took this long to have it understood, at least we do seem to be getting somewhere.

More Like This
How To Stop Breastfeeding A 2-Year-Old
Breastfeeding Twins: Everything You Need To Know
AAP Now Recommends Mothers Breastfeed For 2 Years Or More In New Guidelines
This Reddit Post About Two Sisters In A Fight Over Breast Milk Is Complicated & So Sad