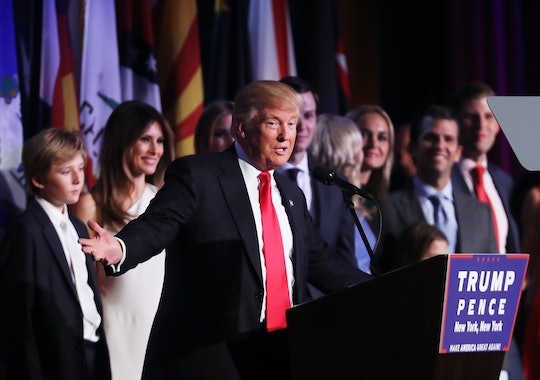 These Are The People A Trump Presidency Has Empowered

The American people have spoken, and what they've said has shocked the world. Analysts, and much of the public, expected former Secretary of State Hillary Clinton would win the presidential election. Many thought that most of Donald Trump's supporters were just Russian trolls and Twitter bots. But now the curtain has been pulled back, and his supporters have come forward. The people that a Trump presidency has empowered are real, and frankly, they're terrifying. They're out on the streets, loud and proud, and they're showing their true colors. What was once abstract is now all too real, as Americans are learning on Wednesday.

Trump ran on a platform of racism, anti-Semitism, xenophobia, and misogyny. He's pledged to build a wall to keep Mexicans out of the country, proposed a ban on Muslim immigrants, and bragged about committing sexual assault (he's current facing a lawsuit accusing him of violently raping a child, and a hearing is scheduled for December). Trump has denied all the allegations, but his campaign has not returned Romper's requests for comment. The Ku Klux Klan came out in support of him. American neo-Nazis rooted for him. Many in his own Republican Party, including former presidents, refused to endorse him or vote for him. But millions of voters did, and now America is waking up to see who those people really are.

When Trump first started gaining strong support, some of us were shocked at how many of our fellow Americans — even our friends, family, and neighbors — were willing to overlook his blatant bigotry. We're now realizing that they weren't overlooking it, they subscribed to those same views. I blamed my ignorance of how racist and sexist my country was on the fact that I live in a liberal area, but then I started seeing Trump signs crop up on lawns in my own neighborhood.

We thought most people didn't hate women and minorities and LGBT people anymore. This isn't the 1950s, after all. It turns out that some people never really stopped thinking that way, they just stopped talking about it so openly. Now that the election results have shown them that so many Americans agree with Trump supporters, they've been given license to spew their hate freely.

It's a new day in America. We thought Trump and his supporters were trying to turn back time, but what they've really done is opened our eyes. He hasn't made America great again; he's made it honest again. And the truth is that we're not nearly as progressive as we thought we were.

These people who joke about assaulting women, who threaten gay people, who want to deport anyone whose skin isn't white, they don't represent all of us. They get more attention because they're loud. We need to be louder. We can't look the other way anymore. Conflict is hard, but it's the only way to make progress. Men, when you hear "locker room talk" from your fellow men, speak out. Tell them what they're saying is wrong, and explain why. White people, if your neighbor makes a derogatory comment about Mexicans, or any other immigrant, challenge them. And when your friend posts "Blue lives matter" on Facebook, explain to them why that's inappropriate. Christians, remind your fellow parishioners that Islam is not a religion of hate, and that you both worship the same god. Straight people, be an ally for your LGBT friends and family members, because whether you know it or not, you probably have a few. Hillary Clinton's campaign taught us that we're stronger together. It's time to raise our voices and loudly proclaim that we will not excuse hate anymore.